Early examples of erotica are often quite graphic—explicit scenes that some would define as pornographic, although as courts around the world have discovered, it is far from easy to define the fine subjective line between erotica and pornography. 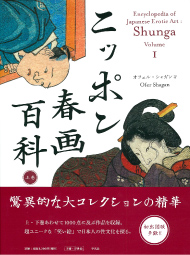 It was photography as much as anything else that put an end to what had been a thriving trade in Japan’s own artistic erotica. Known as shunga (meaning “pictures of spring”, the seasonal allusion being a common code word for sex). Like much else, it was imported from China and historians have suggested that illustrations in medical dictionaries introduced into Japan in the Muromachi Period (1336–1573) might have been what inspired Japanese artists to begin producing their own images of sexual acts in the Chinese style. 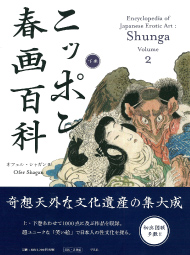 By the Edo Period (1603–1868), the production of shunga was a thriving industry, thanks to the rapid development of woodblock printing techniques and the willingness of even the best-known artists of the time (such as Katsushika Hokusai and Kitagawa Utamaro) to produce pieces and there is evidence to suggest that what resulted was enjoyed across the broadest strata of society.

Most of what remains of shunga is in woodblock format and in the Ukiyo-e style, although a few painted scrolls exist that pre-date that. In these two meticulously prepared volumes, we are given the chance to see just how broadly the artists who worked in shunga explored their themes.

The images are usually extremely explicit, but are somehow saved from being overtly pornographic (there’s that subjective, judgmental term again!) because they are more often than not caricatures. The genitalia are exaggerated to a ridiculous degree and the sexual positioning surely far beyond anything even imagined in the Kama Sutra. It is hard to imagine even the most highly testosterone charged teenager sitting wrist a-blur over such images.

The explanatory text is kept to a minimum while affording insights into how shunga developed. Unfortunately, it (like the captions to the copious illustrations) is exclusively in Japanese and while it is not necessary to be able to read Japanese to enjoy the works of art on offer, it is to be hoped that an English translation might at some point become available, if only as a guide for anyone wishing to invest in this very particular form of Japanese woodblock print.