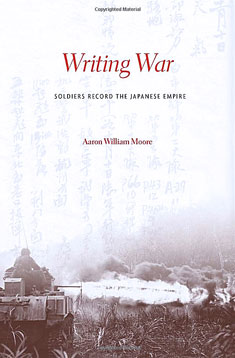 Research by a historian at The University of Manchester indicates that soldiers of all nations who fought in the Far East during World War II were partly radicalised to commit atrocities by their own diaries.

Dr Aaron William Moore has spent more than a decade studying a facet of the conflict that has previously not been examined. His book—Writing War: Soldiers Record the Japanese Empire—was released in June by Harvard University Press.

Moore, 36, who is originally from southern Ohio in the US but has been living in Manchester since 2010, studied the private diaries of more than 200 combatants from China, the US, the UK and Japan. They were written during the eight years of “total war” up until Japan’s surrender in 1945.

Several of the personal accounts were written in the aftermath of the December 1937 Rape of Nanking, when hundreds of thousands of Chinese civilians and disarmed soldiers were murdered by Imperial Japanese Army troops.

A soldier named Toshimichi Ouchi was one of the first into Nanking after the city’s surrender. He confided in his diary, “The Chinese army has become really despicable to me; I want us to wipe them out as quickly as possible”.

“The state did not ‘brainwash’ these people into committing atrocities”, Moore told BCCJ ACUMEN. “Rather, it was a number of factors, including their diaries, which they used to build up a rationale that normalised acts of extreme violence”.

The same attitudes existed on the other side of the front line.

John Browning, an American artist and former Boy Scout, witnessed the beheading of a Japanese captive by machete and later wrote in his diary, “War is war, and the Geneva Red Cross Convention … is a long, long way from the front line. There is but one law here: KILL, KILL, KILL!”

Moore traces his interest in the subject to an undergraduate programme in Japan, during which he met an archery teacher who had fought in China.

“His involvement in that terrible conflict had always fascinated me, as he was a very generous, if stern, man”, Moore said.

“I was also [advised to read] many personal accounts of the war over the years, and became a kind of addict of diaries, letters and memoirs.

“The war is, of course, interesting to me, but the personal nature of these accounts is what kept me going for over a decade”.

Moore’s research indicates that soldiers on both sides created justifications in their diaries for committing acts of violence and accepted them as true and accurate accounts, as opposed to a work of fiction.

“You have to understand the long history of ‘factual’ record keeping that these men were exposed to in reportage and military culture”, he pointed out. “They spent a lot of time generating anger by listing enemy atrocities, giving themselves reasons to seek revenge and reproducing propaganda about themselves and the enemy”.

Moore believes that diaries written by soldiers in wartime can actually be quite dangerous because their writers see them as “repositories of unchangeable truths”.

“These soldiers often came from ordinary backgrounds but, through their writing, they established a rationale for extreme behaviour, getting angrier and angrier”, he explained. “You can’t rewrite a document and you can’t change history.

“However, the diaries did not simply lead to atrocities”, he added. “As I point out [in my book], many men inscribed a powerful hatred for war in their personal records, which became an unshakeable conviction in the post-war period, no matter where the fickle winds of public opinion happened to be blowing”.

And, while he believes that the same rationale concerning diaries and violence holds true in modern-day conflicts, there are some subtle differences.

“I would also say that the internet and web forums have created new ‘echo chambers’ and bubble universes, in which opinions are more collectively generated”, he suggested.

“My diarists were not living in isolation. As I show in the book, they were insatiable consumers of mass media and lived in a group-oriented environment. But I think social media, email and blogging have subjected our views to a lot more group scrutiny, for better or for worse.

“It’s also becoming increasingly difficult for the state and the mass media to frame public opinion as they did during the war”.

As well as appealing to anyone with an interest in the war in the Far East, Moore said he hopes the book will “encourage people to think about their relationship with language and their sense of self, especially in the age of Facebook, blogging and email”.

BCCJ ACUMEN has one copy of this book to give away. To apply, please send an email by 31 August to:
editor@custom-media.com. The winner will be picked at random.