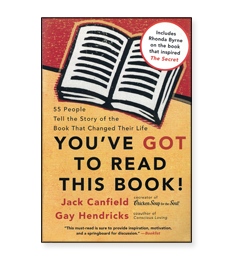 You’ve GOT to Read This Book!
By Jack Canfield and Gay Hendricks
$14.95

If you’re an avid reader, you probably have friends who share your love of books. You may even share the books themselves—passing them around your circle of friends and exchanging views. In which case, you’ll no doubt have had someone say to you, “You’ve got to read this book!” You even might have said it yourself.

Between the covers of this eclectic compilation there are opinions galore, drawn from a large variety of fields, from household names to others less well known. The books they chose are an interesting mix. With no shortage of the obvious self-help titles—among them: Love is Letting Go of Fear, The Seven Habits of Highly Effective People and The Power of One—there are some intriguing surprises too: To Kill a Mockingbird, Don Quixote and even Mein Kampf. The authors, Jack Canfield, of Chicken Soup for the Soul fame and Gay Hendricks, co-author of Conscious Living, have compiled a fascinating collection. Each story is concise, self-contained and refreshingly different from the others—an ideal volume for dipping into. 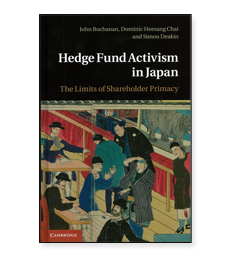 To many on the outside, corporate Japan is a big mystery. How can major corporations operate without appearing to pay attention to their shareholders?

The copywriters and editors who, as native speakers of English, produce annual reports for Japanese firms, frequently struggle to balance the need for internationally accepted openness and transparency with the Japanese preference for conformity.

It often comes down to one basic question: what is the core reason for the firm’s existence? Is it there to make money (benefitting shareholders), or to provide employment to support a community and sustain a corporate legacy?

In post-1945 Japan, the latter seems to have been the priority—employees and customers were much higher in the hierarchy than mere investors. However, as the Japanese economy grew, those on the outside began to see potential for rapid and large gains. But their tactics and approach were often at odds with what made the Japanese corporate world feel comfortable.

In Hedge Fund Activism in Japan, authors Buchanan, Chai and Deakin explore the various attempts by US and UK hedge funds to penetrate and alter the corporate structure in Japan. The very concept of the hedge fund appears to be in contrast with the Japanese management model, and the infamous Steel Partners/Bull-Dog Sauce court case of 2007 makes a good example for anyone wanting to explore the complexities.

As a specialists’ book, the authors make few allowances for readers with little financial expertise, but it is a serious study of whether hedge fund activism is truly an option in Japan.