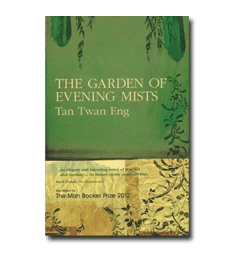 “On a mountain above the clouds once lived a man who had been the gardener of the emperor of Japan”.

So begins the latest offering written by one of the most promising authors from South-East Asia.

But the fairytale-like opening does not even begin to hint at the dark and complex story that follows.

The communist guerrillas are still fighting the British and anti-Japanese feelings are extremely high. But in the Cameron Highlands there is a unique enclave: a Japanese garden.

The technique known as shakkei (borrowed scenery) is central to the art of the Japanese garden. Eng uses his obviously sharp understanding of this particular area of Japanese sensitivity to great effect.

His intricate and carefully crafted novel seems to pose the question: how does shakkei work in our lives outside the garden setting? Is what we see exactly what we think it is, or is it something altogether different?

Eng’s characters are drawn with exquisite skill. The main protagonist, the lone survivor of a brutal Japanese concentration camp, has lost fingers in a cruel and painfully depicted torture.

Her close confidant is a South African tea planter who lost an eye during his participation in the Boer War.

Aritomo, the protagonist’s teacher—in more ways than one—is the former gardener to the emperor of Japan. But, like the magical garden he has so lovingly created, he is not what he seems.

Shrouded in mystery, the keeper of many secrets also has unexpected talents.

Eng has a fine understanding of Japan’s hidden culture and a tremendous gift for revealing it. He writes with an elegance and style that is beautifully understated, only occasionally approaching purple prose yet, even then, managing to avoid overstepping the line.

For the most part, he is able to create powerful images with the simplest of sentences.

“My eyes wandered from one end of the mountains to the other. ‘Do you think they go on forever?’

“‘The mountains?’ Aritomo asked, as though that question had been posed before. ‘They fade away. Like all things’”. 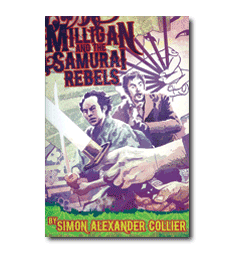 Novels set against a Japanese historical background are not unusual. Indeed, there was a time not so long ago when they were the fashion.

Some succeeded better than others at capturing the sense of time and the cultural underpinnings. Some were more accurate than others when it came to depicting Japan and its social mores.

However, what they all lacked was a sense of humour.

Simon Alexander Collier’s take on shogun territory is altogether different in that regard.

Historical accuracy is present in the book, as are the frantic efforts of the samurai to resist the opening up of a feudal Japan. The book also features infighting among the Western nations that seek to gain the upper hand in influencing the Japanese government, so that they might secure trading privileges.

But these details are solely the backdrop for a more personal and somewhat eccentric story.

The book is told through the eyes and voice of a young British diplomat, Milligan, who is given to appreciate the attractions of the opposite sex and the liberating effects of strong drink.

The author is himself a former British diplomat now working in the private sector. Of his other proclivities we know not, but his experience has allowed him to deliver an intriguing tale.