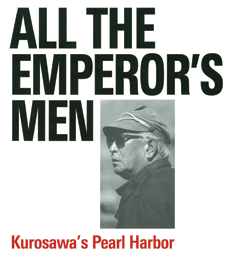 Akira Kurosawa was without a doubt one of the finest directors to work in the Japanese film industry. He was also one of the very few whose oeuvre won worldwide acclaim.

His mastery of the medium together with his reputation in Japan for being a demanding perfectionist led to him acquiring the nickname “the Emperor”.

So it is perhaps not surprising that in 1966, when Twentieth Century Fox Film Corporation was contemplating making a film about the notorious 1941 Japanese attack on Pearl Harbour as examined from both American and Japanese perspectives, the producer, Elmo Williams, recommended Kurosawa to direct the Japanese sequences.

Kurosawa was suitably courted and set about working with his usual attention to detail. Not only did he work with the writers of the film script, but he also drew his own storyboards showing how each shot in every scene should look.

Shooting began in December 1968 but, three weeks later, the celebrated director was summarily dismissed and expelled from the studio.

Almost immediately there was a media outcry and rumours were rife. It was said by some that Kurosawa had had a nervous breakdown—there were countless stories of his eccentricities on the set—while others believed it was a plot by his associates who were bent on betraying him, and some even blamed a Hollywood conspiracy.

Ironically, the tragic thread that Kurosawa had seen in the story of Pearl Harbour—almost Lear-like in its poignancy—was playing out in real life—his life.

This was a classic example of what happens when two cultures clash: miscommunication, unread assumptions, and misunderstood expectations.

Hiroshi Tasogawa, the author of All the Emperor’s Men: Kurosawa’s Pearl Harbor, is singularly well placed to write this definitive book. A seasoned journalist who has reported for NHK (the Japan Broadcasting Corporation) and The Associated Press, and who was a professor of media at Tokai University, Tasogawa served as translator, interpreter and researcher to Kurosawa at the time he was engaged with the film.

But his current publication is not a translation. It is a completely reworked manuscript that draws on previously unavailable documentation from Twentieth Century Fox and other archives.

All the Emperor’s Men has the support of the Kurosawa family, who collaborated with the author and thus enabled him to produce a definitive account of what happened on and off the set of what might have been one of Hollywood’s greatest films.

Chapter by chapter, Tasogawa sets out in meticulous detail the events that led up to the momentous decision to dismiss “the Emperor”.

The reader is let in on internal meetings and exchanges of correspondence at the film studio; invited onto the carefully constructed—and often reconstructed—sound stages in the Kyoto film studios; and catches glimpses of Kurosawa’s shooting scripts.

Often courting controversy, Kurosawa, on this occasion, dismayed the world of Japan’s professional actors by casting non-professionals to play the leading naval characters and invited ridicule by parading them in public in their costumes.

But there were other more worrying eccentricities. These the author deals with in a detached but sympathetic way, inviting us to form our own judgment: was Kurosawa mentally unstable or otherwise ill? The expert medical evidence is examined for the first time.

This is a compelling piece of investigative reporting that sheds completely new light on the controversy that surrounded the aborted partnership between one of Japanese cinema’s leading masters and one of Hollywood’s giants.

It is written with authority and compassion and will appeal to anyone with an interest in the world of Japanese cinema.

Far more reaching than that, however, it will draw the attention of anyone who has an interest in cross-cultural communications and wonders why, sometimes, the best of intentions are simply not enough to achieve a common goal.