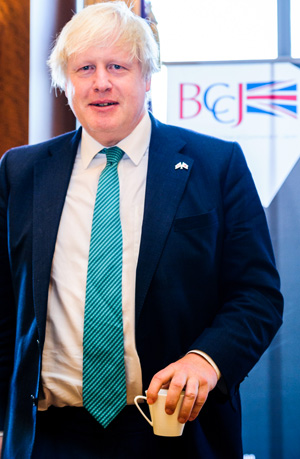 Boris Johnson was speaking at the BCCJ for the second time.

In its history, the British Chamber of Commerce in Japan (BCCJ) has hosted a number of high-profile politicians and dignitaries, but few can match the presence and star quality of Secretary of State for Foreign and Commonwealth Affairs Boris Johnson, who on 21 July addressed 140 guests at an event hosted by the BCCJ at the Shangri-la Hotel in Tokyo. That marked the second time he had spoken at the BCCJ, having first been a guest of the chamber in 2015.

Holding one of the four great offices of state and having played such a pivotal role in 2016’s European Union (EU) referendum, anticipation was high as to what Johnson would say. In a wide-ranging interview with BCCJ Interim Executive Director Emma Hickinbotham, he covered topics such as Brexit, UK–Japan cooperation and the Olympic and Paralympic Games, while peppering his answers with the kind of colourful and humorous remarks that have become his trademark.

Parts of the talk are reproduced below, exclusively in BCCJ ACUMEN.

Warm welcome
Before his interview with Hickinbotham, Johnson offered some introductory remarks to guests. He began by noting that it was a pleasure to be back at the BCCJ and told guests about his experience going for a run around the Imperial Palace before that morning’s event.

“It is actually very bad for the ego”, he said, “because absolutely everybody, no matter what age, overtook me.

“The reason I didn’t mind was because I have already seen what Japanese people can do—it’s not just that elderly Japanese women effortlessly overhaul me, I have to tell you that yesterday I saw a robot that can run faster than me”, he explained, referring to one he had encountered during a visit to Waseda University. “Certainly it has a better sense of balance than I have—last time I was here, some of you may remember I came a cropper playing a game of rugby with a 10 year old”.

He then outlined the strength of the London–Tokyo relationship following the Brexit decision, pointing out Japan’s continued UK investments, of which the sale of ARM Limited to SoftBank Group last year was arguably the most notable example.

“But of course we in the UK are getting the ball back over the net”, he said. 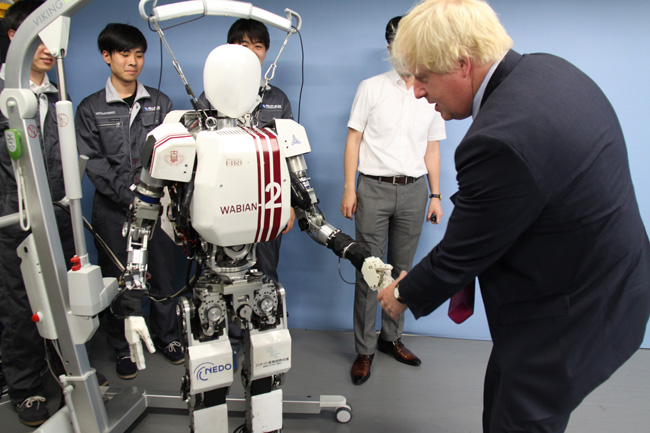 “Waseda University is leading the world in robotics, but they are teaming up with Birmingham and with Loughborough, and I see in the future our countries coming together to solve some of the problems that afflict us. We both have an ageing population—we are both going to need automation to help us deal with the problems of our society.

“And I foresee a time when Birmingham and Waseda will come up with a brilliant new prosthetic robotic mobility aid to get me round the Imperial Palace next time I come here”.

Doing the deal
As the interview got underway, Hickinbotham joked that she was no Jeremy Paxman.

“Jeremy Paxman is much easier than he used to be”, Johnson quipped.

Hickinbotham’s first question addressed the state of the government’s negotiations following the election in June.

“What’s your response to many who say that the UK government isn’t handling Brexit so well and they’re too focused on the internal politics?” she asked.

“Some of my friends and colleagues who were not particularly keen on Brexit when it began, they remain a little bit unreconciled. But they saw the election and what happened there as an opportunity perhaps to turn it back” he replied.

“I think since then it’s become obvious to everybody that isn’t going to happen—85% of MPs in the House of Commons were elected on a manifesto to get Brexit through. We’re going to do it, but we’re not leaving Europe—it’s absolutely crucial to understand this.

“We will have a big free trade agreement with the rest of the EU, and we will construct a new architecture for the way in which we want to support the EU in defence and security and foreign policy—all the other ways in which we interact”.

Hickinbotham’s next question concerned the announcement in early July of a free trade agreement between Japan and the EU: “Can you tell us why the UK is so keen to see that agreement successfully implemented? And what kind of trade deal do you see in the future, or hope to see in the future between the UK and Japan?”

“We see the [Economic Partnership Agreement] as a brilliant trade deal”, Johnson said. “We want the relationship to be grandfathered on as we come out of the EU. We will want to take up that free trade deal, but we want to go better and we want to do more.

“There are great things that the UK can offer in services”, he added. “World trade hasn’t been growing as fast as it should—that’s partly because we don’t open up trade in services enough.

“I hope that the UK and Japan can work together to open up that services market in which, by the way, we are both extremely strong”.

The Japanese investment in the UK that Johnson referenced in his opening speech has come under scrutiny following the referendum, with changing trade conditions threatening to scupper future investment. How is the government reassuring Japanese manufacturers, Hickinbotham asked.

“We want to have frictionless trade across the existing border, and there’s not reason at all why that shouldn’t happen. It’s very much in the interests of our European friends and partners that it should happen”, said Johnson.

“It is not beyond the wit of man. I mean, come on folks, if we can make a robot that can run faster than me, we can have frictionless trade at the border between Dover and Calais”.

Returning to the topic of the election, Hickinbotham asked: “In terms of the leverage the UK has, I think you’ll agree the political stability in Europe now is a lot stronger than it was pre-Brexit. How has that affected our negotiating position? What leverage do you think the UK has now in terms of getting what we want?”

Johnson summarised the subtext of the question as being that, as a result of the election, the UK “looks relatively enfeebled … whereas the EU is bursting with vigour and confidence and all the rest of it”.

“Well, up to a point Lord Copper”, said Johnson, quoting from Evelyn Waugh’s Scoop, a satire based on the former heart of Britain’s press, Fleet Street.

“What a lot of people feared a year ago was that Brexit would lead to the dissolution of the rest of the EU … and that has not happened. The EU remains coherent, it remains more or less united … and that is a profoundly good thing for us as we negotiate our way out”.

Turning again to UK–Japan relations, Johnson was asked what he would be discussing with his counterpart Fumio Kishida. In addition to issues such as North Korea, he highlighted bilateral cooperation when it comes to space.

“We’ll be looking for candidates to send into space”, he said, pausing, before adding, “I can think of a few”, raising laughs from the audience.

“It would perhaps be a measure of Anglo–Japanese cooperation if we could agree on who we would like to be first on that rocket, but perhaps with my reputation for diplomacy I won’t volunteer any names”.

Looking to 2020
The conversation then turned to the subject of the Olympics, with Johnson scheduled to have a meeting with Tokyo Governor Yuriko Koike after the event with the BCCJ.

“What tips would you offer her for hosting a successful games?” Hickinbotham asked.

“Well I would hesitate to offer anybody in Japan any advice on organising anything, since it all seems to run so absolutely brilliantly”, he replied.

“We did have a very successful games in London in 2012 and it was a wonderful atmosphere, but I’ll tell you why. It was because we allowed the British public and the British media—it’s a bit like Brexit, by the way—to get almost hysterically gloomy before. And so they went through a long, long trough of negativity, and it is true that virtually everything that could go wrong seemed to go wrong.

“And this is what I would say to Governor Koike, to the Olympic team here in Japan: don’t get downhearted, don’t get downhearted when people are negative about it and start to uncover all sorts of nasty things, because it will happen—but then suddenly it’s like the nation suddenly comes together and people want it to be a success”.

Over to the floor
BCCJ members were then given a chance to pose their questions to the foreign secretary.

“Which country is top of your list in terms of a trade agreement?” asked Joachim Stobbs, international tax services partner at EY.

“The truth is, the easiest is going to be Japan, we think, for the reason we’ve just discussed”, Johnson replied. “I also think, by the way, that the [Trans-Pacific Partnership] is worth looking at.

“I’m a free-trader and I think that the UK should [look at it]. If it’s possible to play a role in keeping that project [going], then we should do that as well”.

Part of the difficulty, Johnson admitted, is a shortage of trade negotiators in Whitehall. As a result, the government has turned to hiring negotiators from New Zealand, even though they’re “on the opposite side”.

“We love New Zealanders, but we’re worried they want to bomb our hill farmers with their frozen lamb, so it’s not easy”, he joked.

The issue of cross-border data flows was raised by Ken Katayama, deputy director of corporate affairs at Microsoft Japan Co., Ltd., who pointed out that EU Commissioner Vera Jourova and Personal Information Protection Commissioner Haruhi Kumazawa had decided earlier in the month to continue the discussion between the EU and Japan on the free flow of personal data.

“Do you have any comments on that and the situation in regard to the UK?” he asked.

“This is absolutely critical, and this is one of the areas where free trade can suddenly get blocked in a way that people hadn’t predicted”, said Johnson.

“I think we’re approaching the point where we really need a global understanding about how to manage this, because the risk is that, whether it’s the EU or other actors, they will start to use data protections as an excuse for commercial protection, and I think that will be a real pity”. 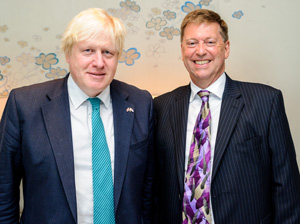 “I thought Emma chaired the Q and A magisterially”, he wrote.

“Well done to you all … for arranging and delivering at such short notice”.