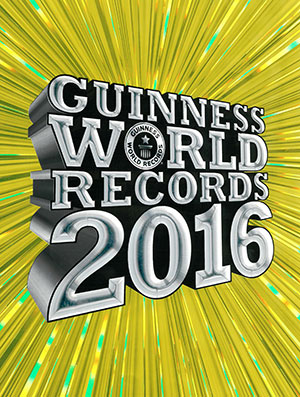 This is a big, brash, boastful book filled with every kind of record you can imagine—and many you can’t—but which make for fascinating, if sometimes unbelievable, reading.

Guinness World Records 2016 marks the 62nd year of the publication, which itself holds a world record: it is the best-selling copyrighted book of all time, having sold 100mn copies in 100 countries in 37 languages. It also has the rather dubious distinction of being one of the most frequently stolen books from libraries in the US.

Despite its undeniable success, the book’s origins are rather humble, and the first edition—of 1,000 copies—was actually given away as a marketing exercise.

The idea for a book that gathered together world records came to Sir Hugh Beaver KBE, then-managing director of Guinness Breweries. At a shooting party in County Wexford, Ireland, in 1951, he became involved in an argument over which was the fastest game bird in Europe. He realised there was no publication that could confirm this, and it occurred to him that there must be many other such questions being debated and argued about in pubs across the country.

So, in 1954, two brothers, Norris and Ross McWhirter—both of whom were reputed to have encyclopaedic memories—were commissioned to produce what would become The Guinness Book of World Records, with the first issue appearing the following year. Then, in 1955, the book appeared in the US and sold 70,000 copies. Since then, it has been a household name.

The 2016 edition, at 255 pages, is quite substantial and the contents impressive: earth, animals, humans in action, extreme exploits, modern world, construction, science and engineering, media and leisure, adventurers and sport. Bonus content is available on the website.

In this Olympic year—Rio will be host to the 31st modern Summer Olympiad—it is not surprising to find a spread devoted to the Games. In it, we discover that the 2008 Games hold two records; one for the most countries taking part (204) and one for the longest distance travelled by the Olympic torch relay (136,794km).

Some records beg the question, why would anyone want to try? For example, the most iron bars bent with the head in one minute. The honour goes to Alexander Muromsky of Russia who, in October 2014, buckled no fewer than 11 iron bars in just 60 seconds; there is no note of whether this gave him a headache.

Japan and its residents claim 27 records this year, including most expensive Christmas tree; smallest printed book; lightest phone; largest curry chain; oldest person; most expensive car crash, and most sold pudding. How many of them can you identify?

Guinness World Records 2016 is a delight to browse through; there is so much information on every page, much of it unexpected. Whether you are simply curious or an avid participant in pub quizzes, it is a wonderfully eclectic resource.