At the Tyler Foundation’s Rhinestone Cowboy fundraising gala dinner on 1 October, the star of the glittering show was not among the many generous bidders for the donated auction items, nor one of the petite cowgirls in revealing denim shorts. It was not even the mechanical bull and its brave riders — it was a cool and calm four-legged VIP, who won over the 369 guests as he casually sauntered on stage oblivious to the bright lights, flashing cameras and rapturous applause.

Bailey is Japan’s first full-time Therapy Dog and came to show guests where their money went last year. Along with handler Yuko Morita, the 2½-year-old golden retriever has since January become a key part of standard treatment at Shizuoka Children’s Hospital following 18 months of training in the US — thanks to the Tyler Foundation.

“Bailey goes bedside to give children courage and even accompanies them during medical procedures. But the best medicine may be the hugs and smiles”, said Morita.

“When I walk into the wards, children say, ‘Bailey is here!’ with such lively voices. Children ask the hospital staff, ‘Is Bailey coming today?’ ” 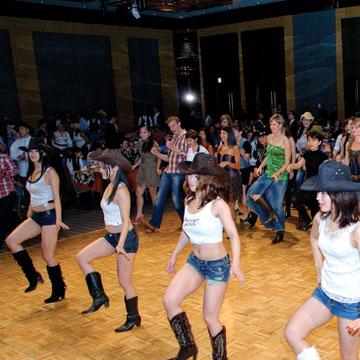 Bailey’s presence surely helped motivate bidders at the Grand Hyatt Tokyo fundraiser to spend an incredible ¥23.9 million. The highest bid in the live auction was ¥2.3 million for a trip to Morocco, donated by British Airways and Aman Resorts, while the silent auction’s top purchase was ¥190,000 for a signed guitar by Slash, of Guns and Roses, donated by Brown-Forman, according to spokesperson Cris Hernandez.

Following the success of Bailey and other Shine On! projects, over the next year the NPO — with the help of Servcorp and other generous supporters — plans to expand the “Beads of Courage” program to many more hospitals throughout Japan.

Tyler Foundation President Kim Forsythe explained: “Children get beads corresponding to various aspects of their treatment. But these are not rewards. The beads symbolise the child’s courage and honour their journey. They empower the child by giving meaning to a ﬁght that is often hard for a child and their family to articulate. The beads are the child’s personal story — and these are very powerful stories indeed”.

The Tyler Foundation was incorporated as an NPO in 2006 by Forsythe and Mark Ferris in memory of their son, Tyler, who had been diagnosed with infant acute lymphoblastic leukemia before he was one month old.

The NPO supports children with cancer and their families in Japan, and is changing the approach to patient support by making life better for children fighting the disease — and improving their survival odds. Its mission is to improve quality of life during treatment and ensure a smooth and successful transition to normal life after treatment through four major programmes: