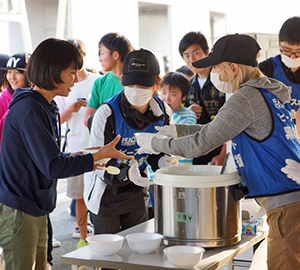 Fortified by knowledge and skills gleaned in the aftermath of the Great East Japan Earthquake in 2011, the British community swung into action immediately after the largest tremors since 1889 struck Kyushu in mid-April.

The epicentre of the initial quake, which hit on the evening of 14 April, was located near Kumamoto City. With a magnitude of 6.2, it caused widespread damage and resulted in the loss of several lives. The same region was rattled by a second tremor, of 7.3 in magnitude, less than 48 hours later.

Fifty people have been confirmed dead, most killed when buildings collapsed or when they were engulfed in massive landslides. As many as 100,000 people were evacuated from towns that suffered the worst damage or were considered at risk due to continuous aftershocks.

The British Chamber of Commerce in Japan (BCCJ) immediately set up a page on its website to provide information for member organisations and individuals looking to help.

It states that officials in Kumamoto have asked individuals not to send items. Instead, cash donations would be appreciated for organisations, such as Peace Boat, Second Harvest Japan and Peace Winds Japan, which are assisting on the ground.

Donations will initially go towards meeting survivors’ immediate needs including food, fuel, clean water and shelter. Once those needs have been met, funds will be used to support longer-term recovery efforts run by local organisations. 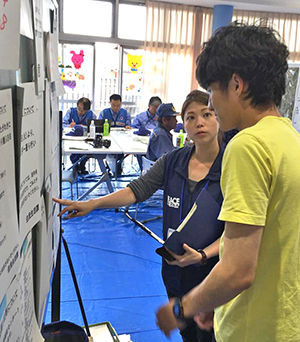 “We are in touch with the heads of four active NPOs on the ground that we worked with after the March 2011 disaster, and we are keeping in touch with the British Embassy in Tokyo regarding messages from the UK government”, said Lori Henderson MBE, executive director of the BCCJ.

“We are also encouraging cash donations rather than aid because donations of things can really disrupt the local supply chain and impede the long-term recovery effort”, she added.

The local offices of British firms were among the first to offer assistance.

Within an hour of the first quake, Unilever had confirmed that all its staff and their families in Kyushu were safe and that no damage had been caused to the firm’s facilities in the region, according to Seikei Itoh, the Japan office’s head of communications.

At the same time, Unilever contacted the local government in Kumamoto, Save the Children Japan and Peace Boat to offer emergency goods.

“We have already delivered 125,000 products, such as shampoo, conditioner, hand soap and body wash, and we will continue to deliver goods in response to the needs of people in the affected areas”, Itoh told BCCJ ACUMEN.

“We have also placed donation boxes at all our sites in Japan, and we are asking our employees to support the people of Kyushu”, he added.

Management at GlaxoSmithKline K.K. was similarly quick off the mark, donating toothpastes, toothbrushes and denture products to evacuation centres through national dental associations and their local branches.

“Our employee–fundraising partner, Save the Children Japan, sent a disaster relief aid team to Kumamoto on 15 April to take care of people who had been affected”, said Shoko Honda, a spokesperson for the firm. 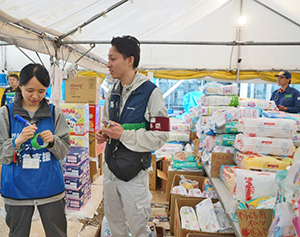 Goods are being distributed to those in need.

“GSK is also calling on employees for donations to support people who have been affected by the earthquakes through Save the Children, and their donations will be matched by the company”, she added.

Sumida Brokers & Consulting Inc., an accounting firm that is one of the BCCJ’s newest members, has been putting its skill set to use.

“We have been translating the national tax authorities’ advice on the easiest ways to make donations, as well as providing advice on how donations can be treated as deductible expenses for tax reasons”, said Naoko Sumida, president of SBC Group.

The British Embassy Tokyo was contacted by a “small number of British nationals seeking advice following the earthquakes”, but was not advised of any casualties.

The embassy, through updates to its travel advice, called on British nationals to heed the instructions of local authorities and to familiarise themselves with what to do in an earthquake. Some ¥100,000 in donations has been collected.

“We strongly encourage all British nationals in Japan to sign up for our Travel Advice alerts through the Gov.uk website to keep updated on any changes that may impact on them whilst in Japan”, the embassy said in a statement.

British aid workers have been among those helping on the ground, including Robin Lewis, international coordinator for the Peace Boat Disaster Relief Volunteer Centre.

“Our team was in Kumamoto just a few hours after the second quake and our initial efforts were focused on assessing the problems that existed: talking to local governments and survivors to see exactly what was needed”, Lewis told BCCJ ACUMEN.

“It’s very easy to do the knee-jerk thing, but effective aid needs to be directed, and the only way to do that is to talk with the people involved and identify needs on the ground”.

Lewis’ team has been arranging coordination with other non-profit organisations in the area: a critical step to ensure that gaps in survivors’ needs do not exist.

“We—as part of the Japan Voluntary Oraganizations Active in Disaster alliance—have been holding coordination meetings every evening to get all the players together, to determine what resources we all have and to identify what is needed and where”, he said.

Peace Boat is also providing hot meals to survivors, many of whom would otherwise still be subsisting on rice balls or bread, and not receiving the nutrition that they require. Hot meals are important in providing psychological relief, he added.

Unfortunately, the scale of the disaster—as well as on-going aftershocks—means that work to identify those structures that are safe will take months. Rebuilding the homes, schools and hospitals that need to be pulled down, as well as roads and other infrastructure is going to take years, Lewis believes.

“The people are very pleased to see people from the outside, and extremely grateful for all the work that is being done to assist them”, he said.