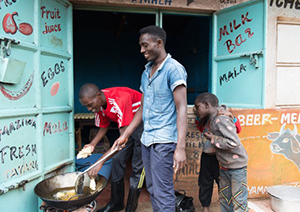 Panel members told three different—sometimes outrageous—tales about the origins of the wines, and guests had to guess which story was true. Besides being a wonderful evening of fun and prizes, ¥400,000 was raised to support refugees and displaced people around the world.

The number of refugees and those displaced by conflict globally has skyrocketed over the past few years. At times, helping those displaced people can feel futile or hopeless when looking at images portrayed in the media. But I have seen first-hand how even the smallest donation can go a long way in restoring dignity and hope for refugees.

I recently came back from a trip to South Africa, where I met many remarkable people including a Rwandan man named Francois, who was forced to flee his home during the genocide. He lost everything and became stateless, first moving to Burundi, then Tanzania, and finally Kenya, where he gained vocational training at an RIJ-funded project.

He has since opened a business in the Dagorreti district of Nairobi and employs two locals, showing how well integrated he has become in the local community.

Aside from success in business, Francois is an award-winning musician. He has used his past and hardships as an inspiration for his songwriting.

Although his music video for Cry of the Refugees won an award in New York City, he was unable to travel to receive his prize because he lacked documentation. In the song he sings: “Young children shout for help, ‘mama mama’, / but their mothers were already dead; / war is bad it took away our parents / war made us to be refugees”.

Despite everything, Francois has moved on and become a positive role model in his community. He has shown how refugees can rebuild a life for themselves, restoring their independence and dignity even after losing everything. These are the people that RIJ supports, and Francois’ story shows how refugees can become valuable members of the community.

This December, we have taken our fundraising efforts a step further by registering with Global Giving, the largest philanthropic crowdfunding website in the world. Applying to Global Giving is a highly competitive process. Non-profit organisations that want to join the community have to go through a thorough application process.

RIJ has passed the first two rounds of this application process and must meet the final challenge—raising a minimum of ¥608,000 from at least 40 donors within one month—in order to move forward.

Within the first eight days of our Open Challenge in December, we are pleased to announce that we have already gone over the ¥608,000 mark, with donations from 27 donors. It promises to be an exciting month.