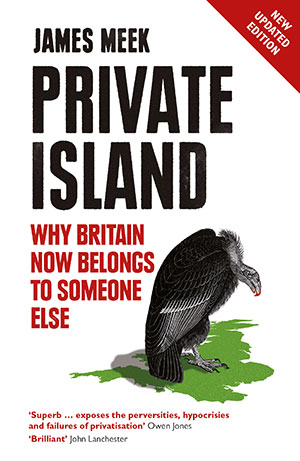 James Meek is a wonderful writer, so what could have been a dry academic look at an aspect of economics, instead is an immensely readable study that takes in six major privatisations: the post office, railways, water, social housing, electric power and the National Health Service. In fact the last is not exactly privatised but, as Meek argues, it has been put into a position where it is forced to act as if it were.

The introduction to his book is fascinating. It starts with a visit to the Ukraine and the Soviet Union. The trip happened just as the latter collapsed, providing the germ of an idea that became the body of the book.

“Watching the vultures come to feast on the carcass of the world’s largest state-owned, planned economy, I began to find the terms to question what had been done by politicians, economic theorists, lobbyists and business people in my own country”.

Chief among these was former Prime Minister Margaret Thatcher LG OM, whom Meek asserts was strongly influenced by the Austrian economist Friedrich Hayek and, in particular, his 1944 book, The Road to Serfdom.

Thatcher saw the world, and especially its economy, through a Hayekian lens. Yet, Meek maintains, by the 1970s, his work—that of a “frightened refugee in wartime”—had been superseded and a better way of understanding the Britain of the time would have been Daniel Bell’s The Cultural Contradictions of Capitalism.

However, as was so often the case, Thatcher was determined to stick to what she believed in, and privatisation was a strong conviction.

“Privatisation”, she wrote, “was one of the central means of reversing the corrosive and corrupting effects of socialism … the state’s power is reduced and the power of the people is enhanced … privatisation is at the centre of any programme of reclaiming territory for freedom”.

But, as Meek points out, despite Thatcher’s convictions, privatisation “failed to turn Britain into a nation of small shareholders. Before Thatcher came to power, almost 40% of the shares in British firms were held by individuals. By 1981 the figure was less than 30%, and by the time she died in 2013, it had slumped to under 12%”.

The reality is spelled out in each chapter of the book and there are quite a few surprises. I was unaware, for example, that the French utility firm EDF is one of the major suppliers of British electricity. It owns a chain of power stations, including nuclear plants. Ironically this means that this industry has been re-nationalised, albeit by the French state and not that of the UK.

Meek believes strongly in the need for a radical rethink of the privatisation project but, as he explains, the book is “not a call for wholesale re-nationalisation along mid-twentieth century lines. The bizarre notion that the only alternative to private ownership is to turn water or train companies into opaquely subsidized government departments is kept alive not so much by left-wing activists as by right-wing commentators”.

This is an important book and one that makes for fascinating, if at times uncomfortable, reading. As John Gray has written in The Guardian, “Do yourself a favour; read Private Island and find out what has really happened in Britain over the past twenty years”.