Osaka’s Hankyu Department Store was the venue for another annual trade event in October: the Hankyu British Fair 2016. Beginning in 1970, and now in its 49th edition (two fairs were held each year in 1975 and 1977), the event serves to showcase UK retail and catering operations, and provides them with an opportunity to meet Japanese customers. Attendees appear on a strict invitation-only basis. After their intention to make the journey to Japan is confirmed, Hankyu meets all transport and accommodation costs.

The Hankyu Department Store in Osaka invited a range of firms to take part in the British Fair.

“I am primarily known for this, the fisherman’s gansey”, said Yasmin Milburn, owner of Island at the Edge, a clothing manufacturing business located on the Isle of Skye. Remarkably, her range of, among other things, fisherman’s sweaters, scarves and wrist warmers, is fashioned from a special type of raw material. Milburn, as well as being a retailer, is also a crofter who, along with her husband, looks after a flock of sheep. Wool from those sheep is used to make her garments.

Island at the Edge is the sole “homegrown”—as Milburn put it—tweed maker on the Isle of Skye. “When people come to the croft, on tours, they can actually meet the sheep that supplied the wool which is used in the tweed”.

“We sold out of wrist warmers by the end of the second day”, she said, referring to the Hankyu event. In all, 30 sets of wrist warmers were quickly snapped up. During the fair, Milburn knitted products while looking after her stall to meet extra customer demand.

If consumers want a specific item, a lack of fluency in English is not a problem.

“I have had hundreds of people visit my stall, and they don’t speak English. Language is not a barrier”, she said. 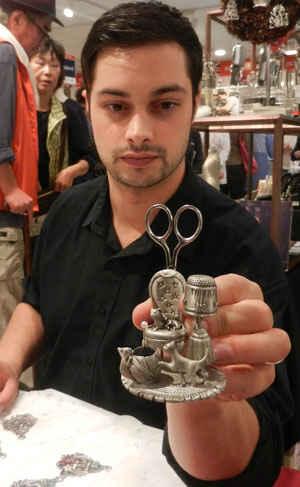 A range of British goods were on sale.

Events such as the fair allow specialised British firms to see Japanese customers. But what effect do they have over the long term? When the tables are folded away and the physical presence gone, what happens?

“The fair had an impact. We sold out of some of our ranges during the second day, and since my return [to the Isle of Skye], I have had subsequent orders, which is very welcome for a small business here”, Milburn later explained by email. The English Midlands, despite decades of industrial decline, is still home to a sizeable manufacturing base.

A.E. Williams, a family-run pewter goods firm based in Birmingham, was also present at the fair. BCCJ ACUMEN spoke to Sam Williams, a partner at the company, just as he was putting the finishing touches to one of his wares.

“The company was established in 1779”, said Williams. “I am the seventh generation of the company. It has always been a trade that has been passed down from father to son”.

A.E. Williams has a 20-strong workforce, which fashions a range of items, including corporate gifts, jewellery, tableware, cufflinks and tankards. Its products are exported to Russia, the Gulf States and the United States.

“Traditionally, the tankards are the pewter item that everyone thinks about. We have the largest and oldest collection of bronze moulds in the world—some of them date back to the early 1700s. Nowadays, we make a lot of corporate gifts, such as pocket watches and flasks, for companies that want their own logo, or mark”, he said.

Patrick Mansfield has a good deal of stamina. He has visited the Osaka British Fair for 31 consecutive years. He lives in two worlds: he has a home in Brighton, as well as Tokyo. His firm is Tower Enterprises, which makes highly detailed metal miniatures.

His best-selling products, he explained, are Alice in Wonderland, Cinderella and Little Red Riding Hood. All the handmade products are fashioned from pewter, in Inverness, Scotland.

“The Japanese market is different from the UK market. If you come to Japan, you have to be very versatile in business. You have to observe the market, and pay attention to the details; packaging is also important”, he said. 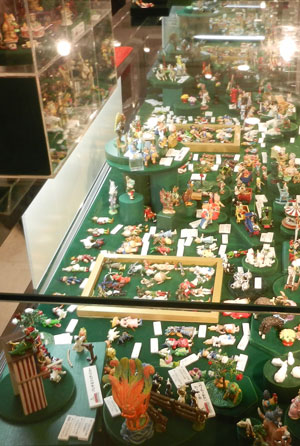 In the UK, he added, small figurines are seen as ornaments. In Japan, though, customers use them as jewellery. Most of the Tower Enterprises items are used as pin badges.

Remarkably, Mansfield does not run a shop. Instead, he only sells his wares at three British fairs in Japan—those held by the Isetan and Mitsukoshi department stores, and of course Hankyu’s. Events such as this, especially for a businessman who only attends trade fairs, are vital.

“Participating in a British fair is the best way of introducing products to the Japanese retail customer. You need to collect information, and be prepared to make simple, but important changes”, he stated.

Within a stone’s throw of the Tower Enterprises stall was the bakery Bloomers of Bakewell. The firm had a substantial catering presence at the fair, with hardware and a busy team constantly readying products for a seemingly endless stream of customers.

“We are right in the middle of the Peak District, and we are famous for our Bakewell pudding”, said Richard Nealon, the firm’s director. “You can only find it in Bakewell. It’s puff pastry, with a layer of strawberry jam.”

There are three layers to these puddings, he explained: almond custard on the top, then the jam; at the bottom, puff pastry.

Bloomers’ products are distributed across Derbyshire and South Yorkshire, and those available during the fair were not made on-site, but prepared in Bakewell. They were then transported to Southampton, before being shipped to Kobe.

“They were defrosted, then reheated”, Nealon said.

Tamao Sako, a Japanese food writer and owner of The British Pudding in Osaka, discovered Bloomers while on a visit to the UK. She liked their products so much that she suggested to Hankyu that the Derbyshire firm be invited to their British Fair. Nealon was quick to take up the offer.

“Their hospitality has been amazing”, he stated.

In the course of the fair, said Nealon, thousands of tarts and puddings were sold. The event, he added, gave the firm the opportunity to see Japan, and to meet a market that was previously unknown.

“Japan has huge potential, and something we would not have considered before”, he said.