The large touchscreen vending machines that are slowly but surely replacing previous generations of devices on train station platforms and street corners across Japan could not function without British technology—the screens, which are the focal point of these state-of-the-art vending machines, are manufactured by Zytronic PLC, a firm based in the outskirts of Newcastle. 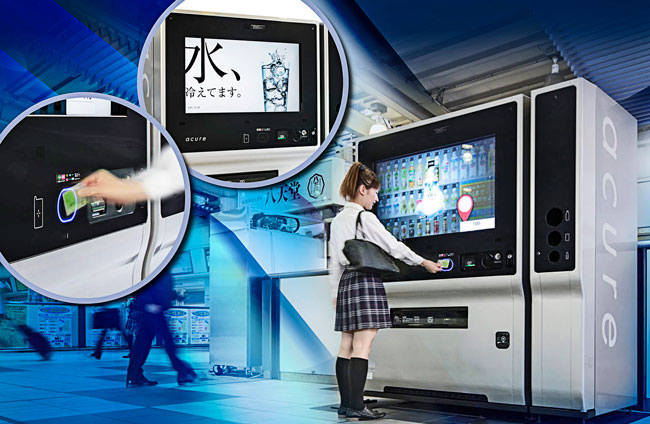 This is, according to Steve Crane, chief executive officer of Business Link Japan Ltd, a perfect example of how an innovative and forward-looking British firm is ignoring the coals-to-Newcastle adage and building a viable business in one of the world’s most technologically advanced societies.


It is also another success story for Export to Japan, a not-for-profit organisation that Crane jointly founded in 2000 as a partnership between the UK government’s Department for International Trade, the British Chamber of Commerce in Japan (BCCJ), British Airways and Business Link Japan.

“Zytronic has patented a very smart type of touchscreen technology that enables them to apply it to large panes of glass and on much thicker glass”, Crane said. “There are very, very few firms in the world who have managed to achieve that degree of sensitivity in such large screens, which also have to be thick to be used in outdoor environments.

“That is their advantage and they want to expand globally, with Japan one of the obvious target markets”, he said.

Vending machines are famously ubiquitous in Japan, and the latest versions incorporate cameras and facial-recognition technology to identify a customer. Depending on age and gender, the screen is able to display images of the product that the software concludes is most appropriate for that consumer.

Zytronic was initially working with a local distributor in Japan and saw opportunities to invest further to accelerate its growth in the market. Since partnering with Business Link Japan, the business has developed to the point where a full-time engineering expert is being appointed to liaise with the Japanese firms that are keen to purchase the technology.

“There are eight major vending machine manufacturers in Japan and we are talking to them all”, said Crane. “A couple of them are already on board, but I know we will get all of them because this really is the technology of the future and they won’t want to be left behind by their rivals”.

And, with a foot in the door of the Japanese market, Zytronic sees significant opportunities for its technology in the form of tabletop displays in karaoke parlours, outdoor display screens, car dealerships and, with the anticipated arrival of the gaming sector in Japan, casinos. 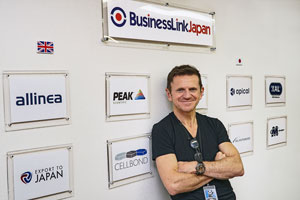 The right links
Originally from Cambridge, Crane was working for a software firm in Japan when he realised the opportunity that existed to bring together British firms with a compelling product and Japanese firms with a whole host of applications. The resulting business incubator was initially located in the British Industry Centre in Yokohama, but in 2011 relocated to its present offices in Gaienmae with three members of staff. Today, it has 17 employees in Japan and a further three based at the Corby Enterprise Centre in Northamptonshire.

“British firms are incredibly innovative and have devised and designed some wonderful products and services”, said Crane. “But very often they are apprehensive about trying to enter Japan—even when they know they could fill a gap in the market here—because they are worried about costs, regulations or a whole host of other issues.

“There is also a common perception that it takes a long time to be successful in Japan, so boards and investors tend to look elsewhere because of the quicker potential returns”, he explained.

Much of Crane’s work involves convincing those firms that costs can be surprisingly reasonable, the language does not have to be a barrier, regulations can be met, Japanese partners are invariably loyal and it does not always take years to turn a profit.

“Our model allows firms that are considering this market to start with a very limited project—they’re effectively dipping their toes in the market here to see the reaction from potential customers and to get an idea of what they need to do to be a success.

“We are able to provide them with honest feedback and then help them to build slowly and ramp up their business in Japan”.

To date, Business Link Japan has helped nearly 70 firms break into the market here, many of them in the technology sector, including Walker Filtration Limited, Allinea Software, Peak Scientific Instruments Ltd. and GA Pet Food Partners.

Another example of the success of the arrangement is Edinburgh-based Korala Associates Limited, a firm that makes ATM software and which is close to completing all the programming tweaks required before it partners with Japanese banks and rolls out the future of ATMs.

Typically hosted in a 24-hour shop, the firm’s Retail Teller Machine, or RTM, does not actually contain any cash—meaning that bank staff are not constantly required to be filling up the machine—but instead releases a ticket that is verified and then exchanged for cash at the convenience store counter. This system also helps the shops, which often build up large amounts of cash and need to frequently visit banks to make deposits.

Even more attractive is the fact the system operates at one-tenth of the cost of a conventional ATM, can be used around the clock and will accept cards issued by foreign financial institutions.

“This is going to completely revolutionise ATMs in this country, reduce costs and solve the problem of banks pulling their expensive units from rural locations”, said Crane.

Bright future
Winner of no fewer than three of the BCCJ’s British Business Awards, for entrepreneur of the year in 2013 and others, Crane believes the potential of Japan for British firms is “simply huge”.

“We are full of innovation in the UK and the model that we have devised makes entering the Japanese market low cost and low risk”, he said.

“And, given the Brexit decision, I sense that more and more firms are realising that they cannot rely on their traditional markets in Europe and they are looking further afield for new opportunities”, he added. “They are looking to balance their risk because nobody knows how things are going to look in a couple of years’ time”.

Since last year’s Brexit vote, traffic to the Export to Japan web site has risen, as have the number of organisations signing up to take part in webinars and finalising contracts.

“I really believe that we are only just scraping the surface in the UK at the moment, because there really is that much potential”, Crane said. “I’m very optimistic and extremely excited”.