When a double-decker London bus emblazoned with the Union Flag and the words “Shopping is Great Britain” is central to your message, it is one that is hard to miss. This made the iconic vehicle perfect for the first campaign to promote UK brands and retailers in Japan.

The bright red Routemaster was turning heads even before the official launch of GREAT Week Japan on 27 October, with Japanese passers-by stopping to have their photo taken alongside the double-decker outside the Marucube space in the Marunouchi Building, Chiyoda Ward. 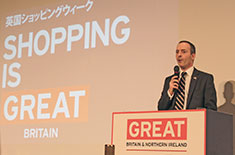 Inside, Minister of State for Trade and Investment Lord Livingston launched an event that had attracted more than 80 British brands from sectors including fashion, retail and luxury, as well as food and drink.


Pointing out that the trading relationship between the UK and Japan dates back more than 400 years, Lord Livingston voiced his anticipation that there would be even more opportunities in the years ahead.

“It is a pleasure to be here to formally launch GREAT Week in Japan, part of my government’s flagship campaign to promote British business and culture”, he told more than 100 guests.

“The campaign is not just about raising awareness of our national brand”, he added. “It’s about helping British companies get their products and services into the hands of businesses and consumers worldwide.

“Japanese consumers rightly demand both quality and value”, he added.

“Tokyo is truly a city of immense style. That is why, in addition to the British brands partnering with us this week, I am delighted to also bring with me 49 companies from the fashion, retail and luxury, and food and drink sectors that embody what Japan wants and what, I believe, Britain is truly great at”. 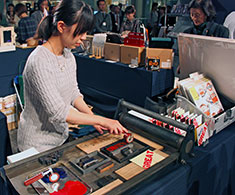 British-themed products were made and sold at the event.

GREAT Week involved a host of events open to the Japanese public, including talk shows at Marucube and a major online campaign offering prizes and giveaways to Japanese consumers through the event’s social media channels.

In parallel, a large delegation of British firms—most of which were visiting Japan for the first time—were able to showcase their products at the British Embassy Tokyo and meet potential partners from the local market.

Speaking to BCCJ ACUMEN at the reception to mark the start of GREAT Week, Marie Rodgers and Maria Livings said they were looking forward to meeting potential Japanese partners for their London-based Lush Designs studio for homeward.

“This is our first time to visit Japan, although we have sold some of our designs to shops here in the past”, said Rodgers.

“What we have seen of Tokyo so far is all very bright and exciting, but we’re really looking forward to being able to meet with Japanese companies, to hear what they think of our ranges, and to see if we can strike any deals”, she explained.

“I think our designs for fabrics, lampshades, ceramics and tinware would work well here. Japanese people seem to be very keen on their pets, and we’re dog people too, as you’ll see from our designs, so we’re hopeful”.

Guests were also addressed in a video by Prince Charles, who set up The Campaign for Wool in 2010 to counter falling global prices for the resource and the impact that was having on farmers.

“For too long we have forgotten what a wonderful, versatile and utterly sustainable fibre it is”, he said, adding that it is cool in summer, warm in winter, durable, fire-resistant and absorbs moisture, making it a favourite among many of the fashion firms taking part in the mission.

“This is a truly constantly renewable fibre that only requires pasture and sunshine to thrive”, he added. “I hope this campaign will put wool back on the map”.

Towards the end of the week, businesses that had taken part in the trade mission were already reporting successes.

Maria Whitehead, director of Hawkshead Relish Company Ltd., was holding talks with a potential distributor to settle the details of how they might work together to market the firm’s award-winning products.

“Having people taste our products at the UK Trade & Investment showcase event was a real delight, as I was able to explain about each item”, she said. “The surprise hit was our Red Onion Marmalade, which was tried with scepticism and yet loved by everyone—without exception.

“Many of the people were very surprised by the flavours of the jams, marmalades and lemon curd”, she added. “I think that the real difference in the flavour of a hand-made product shone through”.

Whitehead was also making her first foray into Japan. Although she had read up extensively on the destination before leaving the UK, nothing really had prepared her for the actual experience, she explained.

“It is busy, but calm”, she said. “Everyone is so helpful and friendly. I have felt so welcomed. Coming here on my own has been a delight and not at all a problem as a woman travelling alone.

“I’m really sad to be leaving as I have made many friends and the trip has really whetted my appetite to see more of Japan”, she added. “But I have no doubt that I will be back and Japan will be host to my relishes soon”.

Speaking of the importance of bilateral relations, Lord Livingston said that “Japan is one of the UK’s closest partners. Not only do Japanese companies invest successfully in the UK, but Japan is vitally important to British businesses, both large and small.”

In conclusion, he noted, “That is why GREAT Week Japan is so important”.