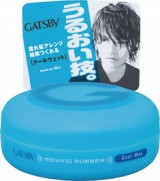 Gatsby is a popular men’s grooming brand in many countries, and has now set its sights on the British market. Its number-one product, Moving Rubber, enjoys a market share of over 70% in Japan.

Since its launch in 2006, over 100mn units of the hair wax have been sold in more than 10 countries and regions in Asia.