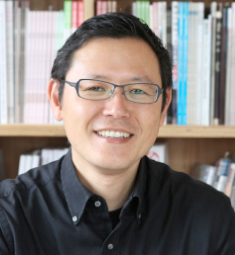 In a city where apartments are notoriously small, badly lit and uninspiring in their design, Akira Koyama has devised an antidote. And so impressive is the Yotsuya Tenera complex that the Royal Institute of British Architects (RIBA) in late June awarded it one of the coveted RIBA International Awards.

Among the 11 other winners of this year’s international awards were some of the biggest names, including the practices of Lord Norman Foster, Sir Michael Hopkins and Wilkinson Eyre Architects.

“When I heard that the design had won, I was quite shocked”, admitted 41-year-old Koyama, founder and representative director of Meguro-based Key Operation Inc. / Architects. “The first I knew about it was when I received a phone call from Kyodo News asking my comments to the award and I was stunned”.

The following day, RIBA confirmed the award—one of the most prestigious in the industry—and praised the architects for “creating a building of coherence and complexity, with 12 distinct types of apartment accessed from two day-lit and naturally ventilated flights of stairs that eliminate the need for any corridors”. 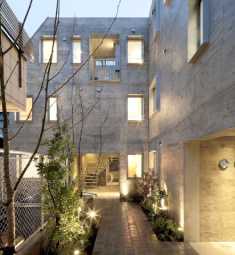 View from the entrance of the approach to the two staircases.

The judges pointed out that design of the three-storey building had been further complicated by the shape of the site and being obliged to comply “with a number of onerous planning constraints”.

Others in the industry agree and Yotsuya Tenera received the Good Design Award 2011 and the Best Architecture award from the International Property Awards, Asia-Pacific, for 2012.

“When we work on an interior design project, if it’s only the internal elements, then there are certain limits, but with this project we controlled everything”, Koyama told BCCJ ACUMEN. “It was the relationship with the site, it was our first concrete building so there were lots of things to learn and I believe it was good for us to try new things, in new categories”.

The result is a series of nine one-room units of about 20m2and a further three units of 30m2. The L-shaped building provides an open space between the entryway and the street, while there are two voids within the structure which permit a compact arrangement of balconies and walkways.

To Koyama, this was important as the voids are carefully aligned to take advantage of the gaps that separate the surrounding buildings, giving residents of Yotsuya Tenera more light and an extended view, creating the feeling of space. The voids also enhance the circulation of air and the building’s glassed roofs provide even more light. 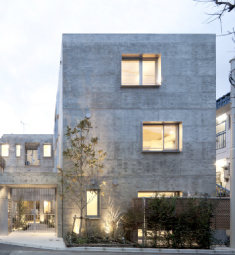 Front view of the property, at sunset.

Making the most of the site is a trick that Koyama, who has a staff of 12, learned on a four-year architecture course at Tokyo Metropolitan University and a masters course at Tokyo Institute of Technology, but was significantly enhanced by the one and a half years he spent studying in Britain from 1995. After he finished his studies at Tokyo Institute of Technology in 1998, he went back to the UK and worked for a series of noted practices, including David Chipperfield Architects.

An admirer of Peter Cook, who has won acclaim since the 1960s for his radical experimentalist approach to design, Koyama applied to study at the Bartlett School of Architecture at University College London.

He returned to Japan in 2003, after six years in the UK, and was quickly in demand for designing shop interiors for a Spanish fashion brand that has been expanding rapidly across Japan in recent years.

The practice was set up in September 2005 and has been forced to relocate twice after outgrowing the office space.

“There are two kinds of business that we do”, he said. “The first is purely design for housing projects, restaurants and residential buildings, but with quite a few renovation projects recently as well. 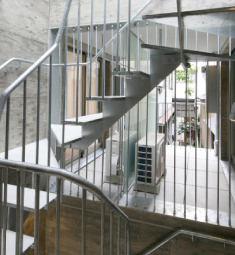 “The second area we specialise in is project management for foreign brands, giving them the space and look that they want in Japan, and helping them because we know the local regulations here and are able to coordinate everything”, he said.

The next project that Key Operation is working on is a six-level restaurant building in Ebisu that manages to provide every floor with an exterior dining terrace—a very important consideration, as Tokyo clients wish to use the European pavement café look for their properties.

There have been problems with the project, he said, as there are with every new building, but those have been ironed out and the venue is scheduled to open next spring.

And Koyama is already looking for the next opportunity to be creative in a unique and eye-catching way.

“It’s my life”, he agreed. “I know some people might see this as a job, but I spend all my time thinking about design and architecture”.