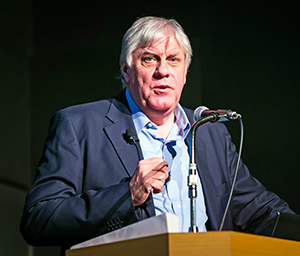 Tokyo needs to create more open spaces where visitors from overseas can mingle with local people and share the excitement of the Tokyo 2020 Olympic and Paralympic Games, according to David Nelson, senior executive partner and head of design for London-based architectural firm Foster + Partners.

Nelson was speaking at a session titled, “Architecture, Urbanism, Innovation” at Academyhills in Roppongi. The event was held in conjunction with an exhibition—organised by the Mori Art Museum—of some of the renowned design practice’s work.

The six-week exhibition, which ran until 14 February 2016, was supported by the British Council Japan and highlighted such iconic projects as the headquarters for the Hongkong and Shanghai Banking Corporation, the new Reichstag parliament building in Berlin, and the Sainsbury Centre for Visual Arts.

The displays also showcased projects in the pipeline, such as the creation of a new development—named Masdar City—in the United Arab Emirates, and Apple Campus 2 in the US.

A frequent visitor to Tokyo over the years, Nelson admits to having a soft spot for the city.
“I’ve been coming here for so long that it feels a bit like home”, he said.

“What is interesting to me is the marvellous richness and functionality of the building types. They may be very diverse, but in a strange way they harmonise”, he added. “And not all the buildings are beautiful—but I could say the same thing about London”.

Tokyo 2020 presents the perfect opportunity to redesign parts of the city, making them into central hubs where anyone without tickets for the Games can meet up to watch events on giant screens. After the hoopla is over, those same spaces can benefit residents of the congested and overwhelmingly grey metropolis.

“As you can see, I’m passionate about public space: areas where people can meet and interact”, he said. “Like many modern cities, Tokyo does not have many public spaces, but I think it would be very interesting to be able to think creatively and to design locations and venues where people can go to share the experience of the Games.

“Public spaces in the centre of Tokyo could be an important part of the legacy projects attached to 2020”, he added.

Founded in 1967 by Norman Foster, now Lord Foster, the firm is renowned for cutting-edge designs, and has 140 partners. Since its establishment, the studio has created blueprints for more than 300 buildings and won international acclaim for melding function, flexibility and sustainability into its designs.

Citing the example of the 56-storey Commerzbank Tower in Frankfurt, Nelson said the intention was to create a structure that would incorporate a large atrium to provide a lot of light and eliminate the need for air conditioning for 60% of the year. Since opening in 1997, the building has been “tuned” to optimise its performance; it currently requires no heating or cooling for 85% of the year.

Foster + Partners is also committed to preserving and repurposing older buildings that have fallen into disrepair—Nelson described this part of the firm’s work as “a very big part of our responsibility”—in order to give them “new life for new people”.

Its work in urban design includes reworking the roads in Trafalgar Square so that traffic is rerouted from its north side, in front of the National Gallery, allowing it to be transformed into a pleasant pedestrian area.

The Millennium Bridge—when it opened in 2000, the first new bridge over the Thames for more than a century—has dramatically increased pedestrian traffic across the river. It is no coincidence that, since then, nearby St Paul’s Cathedral has seen a 40% increase in visitors.

That sort of urban vision for Tokyo, believes Nelson, could transform the city as it celebrates hosting the world’s largest sporting event.