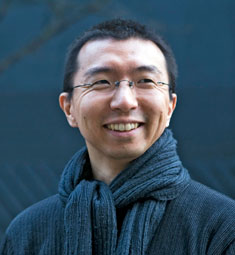 Fujimoto hopes people will visit the pavilion many times.

The Serpentine Gallery Pavilion 2013, which opened in London’s Kensington Gardens on 8 June, has a lightweight and semi-transparent appearance that allows it to blend, cloud-like, into the landscape against the classical backdrop of the gallery’s colonnaded east wing.

A delicate structure of 20mm steel poles, the pavilion and its indoor café are designed to serve as a flexible, multi-purpose social space. Throughout the pavilion’s four-month presence in the gallery grounds, visitors will be encouraged to enter and interact with it in different ways.

“The pavilion was inspired by the beautiful surroundings of Kensington Gardens, which are so green and full of trees”, Fujimoto told BCCJ ACUMEN. “I wanted it to melt into its surroundings, and one of the strongest points of the design is that it is semi-transparent.

“I wanted the structure to appear as if it is emerging from the green ground and almost rising into a cloud”, he explained. “[The pavilion] has a duality of meanings, and I want it to mean different things on different days.

“I want people to visit the pavilion many times because it will change day by day, depending on the weather, light, time and season”, he added.

The modules for the structure were constructed in York and Fujimoto travelled to London to oversee the placement and interconnection of the components on the 350m2 lawn.

Once construction commenced, however, there was no shortage of challenges, Fujimoto admitted. Minor issues, that had not been noticed—either on the three-dimensional computer imagery or in the scale models—quickly became apparent when a start was made on connecting the modules.

Moreover, a difference of just 1mm in a single component translated to several centimetres over the entire structure.
The configuration comprises more than 20,000 individual elements and 9,000 nodes—compared with around 2,000 nodes in a typical building.

Aged 41, Fujimoto is the youngest architect to be invited to design the Serpentine Gallery’s temporary pavilion. The annual architectural programme is considered one of the most ambitious and prestigious in the world.

Architects who have taken on the task in previous years include Frank Gehry (2008), the late Oscar Niemeyer (2003) and Zaha Hadid CBE, who created the first design in 2000.

The selection of Fujimoto marks the third time that a Japanese architect has been chosen to design the pavilion—following Toyo Ito in 2002, and Kazuyo Sejima with Ryue Nishizawa in 2009. The choice also reflects Fujimoto’s rapid advance as a rising star in the world of architecture.

Credited with being at the forefront of a generation of designers who are reinventing peoples’ relationships with the built environment, Fujimoto said he is inspired by such organic structures as forests, nests and caves.

His signature buildings, designed to inhabit a space between the natural and the artificial, include such bespoke homes in Japan as the eye-catching Final Wooden House and T House. His larger designs include the Musashino Art Museum and the Musashino Art University Library.

His burgeoning reputation has led to the commissioning of international projects, including the Taiwan Tower and the library at Sweden’s Dalarna University.

Meanwhile, photographs, sketches and polystyrene models displayed in his studio indicate that many more projects are in the pipeline.

Although in the UK Fujimoto already has taken part in a few design expositions, including an exhibition at London’s Victoria and Albert Museum, the Serpentine Gallery Pavilion is his first major project in the country.

“Julia Peyton-Jones, the director of the gallery, came to Japan earlier this year to discuss the concept”, Fujimoto said.

“She wanted to completely understand the design and how important the concept is. The basic shape may be determined by its function, but we must move beyond function to provide a variety of interior spaces with which people can interact”, he added.

And Peyton-Jones clearly grasped Fujimoto’s vision during her visit.

“We are thrilled to be working with one of the most fascinating architects in the world today”, Peyton-Jones said in a statement.

“A visionary, who has conceived an extraordinary response to our invitation to design the Serpentine Gallery Pavilion, Sou Fujimoto has designed a structure that will enthral everyone who encounters it throughout the summer”.