Secretary of State for Business, Innovation and Skills

On a four-day visit to Japan, Business Secretary Vince Cable met Tokyo, Kansai and Chubu government and business leaders who play a vital role in UK-Japan trade. Accompanied by a business delegation, he also launched a campaign to encourage bilateral business.

The Japan-based representatives of UK firms whom he met between 31 May and 3 June were mostly optimistic about prospects for Japan’s economic recovery, indicating that they expect their business in Japan to remain strong over the long term.

In the first post-earthquake visit to Japan by a cabinet minister, Cable underlined the fact that the UK government and the nation’s businesses stand ready to help in the recovery effort, including cleaning up the Fukushima Daiichi Nuclear Power Plant.

He said it is vital that foreign partners continue to trade with and invest in Japan. “I want to emphasise to British firms that Japan is open for business, and urge them to come and see for themselves the opportunities there are in sectors where we have considerable strengths, such as life sciences, business services and the creative industries”.

Even were other markets to overtake Japan in terms of volume, UK firms here reassured him, Japan operations would remain an important strategic benchmark, in terms of quality of product and service, for newer operations in the region. 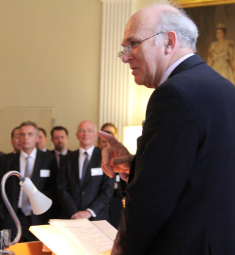 Briefing at the British Embassy Tokyo

Many UK businesses stayed throughout the recent earthquake crisis, he heard, not simply because Japan is an important market, but because they had a network of local partners who helped support them during the crisis in a market that rewards investment in time and personal capital.

At the British Embassy Tokyo, Cable launched “Reassure and Rebuild”, a campaign by UK Trade & Investment and British Airways plc to “reassure UK firms that Japan is safe and open for business following the 11 March earthquake and tsunami”. The campaign will help reinvigorate the economy with trade, investment and R&D, as well as encourage face-to-face communication to boost trade and investment links between the two countries.

The initiative involves BA and Hilton Worldwide sponsoring 50 round-trip tickets between Japan and the UK for media, government and company visits to carry the campaign’s message and encourage business in both directions.

Cable said: “We have met many firms this week and reaffirmed our desire to work in partnership to create the low-carbon infrastructure the UK needs. We have the same objectives in terms of our environmental objectives and energy supply. We see particular potential in low-carbon vehicles and low-carbon power generation. To support this policy, last week I launched the Green Investment Bank with £3bn of government money to support low-carbon projects. And I also announced a Technology Innovation Centre for renewable energy—off-shore wind, wave and tidal power—to be a centre of research excellence”.

Cable highlighted the importance of working on a possible trade deal between the EU and Japan, as the two parties agreed to on 28 May. The potential scope of such an agreement—covering trade, non-tariff barriers and the shared values of the EU and Japan in a parallel political agreement—highlights how important this process could be for both economies, he said.

Cable wants to encourage Japan to pursue the path of an open economy. “The UK supports Japan’s aspirations for an economic integration agreement with the EU and our government, led by Prime Minister David Cameron, has intervened actively with EU counterparts to promote this idea”.

Action is now in Japan’s hands in areas such as transparency, public procurement and clarity over regulation, he added.

“Difficulties already presented by Japan’s unique standards demonstrate the benefits of coming closer into line with global standards. We are pleased to see the progress Japan has made in opening up and welcoming foreign investment, through tax breaks and some liberalisation of immigration”.