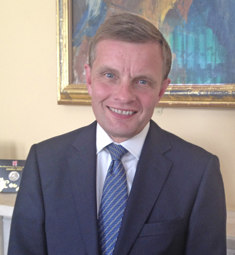 David Jones is the secretary of state for Wales.

The minister was in Tokyo for three days from 14 March to observe Hitachi’s nuclear energy capabilities. The trip included a tour of the Oma Nuclear Power Plant in Aomori Prefecture and a visit to the firm’s Rinkai production facility, where he was greeted by about 200 engineers and staff waving Welsh flags.

Jones said it was “a most impressive welcome” from the firm that is planning to construct a new nuclear reactor at the Wylfa Nuclear Power Station on the north coast of Anglesey.

“I have been very impressed by Hitachi”, he said. “They have been very welcoming and have gone to great trouble to show us every stage of the production process at the Rinkai factory”.

In October, Hitachi announced that it would purchase Horizon Nuclear Power for £696mn and subsequently detailed plans to build at least two 1,350MWe advanced boiling water reactors at Wylfa, as well as undertake a project on a similar scale at Oldbury, Gloucestershire. Approval for the Wylfa reactors is expected to take between two and four years.

“It has been extremely helpful for us to see how the process works and we are confident that the UK will get a significant share of the nuclear supply chain”, he said. “That might be as much as 60% of the first reactor, and we’re hopeful of more than one reactor on Anglesey.

“Potentially, we could have three reactors and that would make a big contribution to meeting energy demand in the UK”, he added.

Jones said that the people of Anglesey are “very familiar and at ease with having a nuclear power station”, and that the Japanese firm “can be assured of a warm welcome”.

He also played down concerns over the safety of nuclear power, despite the problems Japan has experienced at its Fukushima Daiichi Nuclear Power Plant in the aftermath of the 2011 Tohoku earthquake and tsunami.

“We have strong reassurances from Hitachi and all the stakeholders in Anglesey have welcomed that”, he said. Jones added that another developer, who was shortlisted to develop the plant, described the Wylfa location as one of the best in the world thanks, in part, to the very deep water close to the shore.

The project will also bring job opportunities to an area that has experienced some economic difficulties in recent years, he pointed out, including the closure of Anglesey Aluminium Metal Limited in September 2009.

“[The Anglesey Aluminium] site was very close to the nuclear plant, so we have a location available for development already”, he said.

“These jobs will be very high quality in an area that has had a lot of challenges. The local college of further education is extremely pleased and is training apprentices as we speak.

“This is very important, not just in economic terms, but also in cultural terms for the region”, he added. “Anglesey is a Welsh-speaking part of the country and if people are forced to emigrate to find work, then cultural identity is eroded and the language is weakened”.

Hitachi’s project in Wales is just the latest in a long line of Japanese corporations that have been attracted to the country, thanks in large part to the efforts of the now defunct Welsh Development Agency, he said. Sharp Corporation and Toyota Motor Corporation are just two of the most well-known firms with production facilities in Wales.

“We are very familiar with Japanese industry, work very well with Japanese companies and would very much like to see more investment into Wales”, he said.

Although they may not be on the same scale, Welsh exports are finding a firm following in Japan.

The recent Foodex trade show in Tokyo featured a number of Welsh products, including Ty Nant natural mineral water, in its distinctive blue bottles, sea salt, Welsh beers and Penderyn whisky from a distillery in the Brecon Beacons.

“One Japanese importer told us that all the Welsh products that come here are perceived as being of the very best quality and at the very top end of the market”, he explained.

“My trip highlighted the positive outcomes of engaging not only with Japanese companies, but the positive impact British companies are having within the country”, he added.