Dyson was in Tokyo at the end of August for the launch of three new models of his innovative vacuum cleaner line, aimed specifically at the firm’s second-biggest market: Japan.

The event was held at the Tokyo National Museum in Ueno Park, with entrance by way of an imposing traditional Japanese gate. Outside, a range of the stylish cleaning machines sat atop illuminated glass plinths of varying heights rising out of a ceremonial pond. Inside, the man himself evangelised on stage about the engineering of his latest creations and cast doubt upon the claims of his competitors.

The DC36 range—which is available now online and in some stores with the full roll out nationwide by mid-October—sit on balls that allow them to be manoeuvred around corners and turn on the spot without toppling over. And they include Dyson’s patented cyclone technology that prevents loss of suction, Dyson explained.

“If vacuum cleaners aren’t at least 99% effective like ours are, then they’re either losing dust or suffering a loss of suction”, explained Dyson to media. “Despite other manufacturers’ claims, our local rivals achieve between 26% and 65% effectiveness with their models”.

Dyson went on to explain how the cleaning heads use static to help pick up more dust than regular vacuum cleaners. Carbon fibre reduces static so dust does not stay on the floor but is picked up. 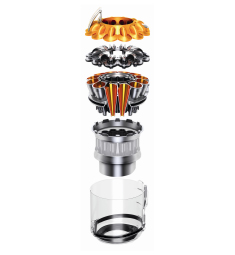 Cyclone technology and unique designs are at the heart of Dyson vacuum cleaners’ global success.

After the presentation, Dyson spoke to ACUMEN about his affinity with Japan, the firm’s growing success here, and protecting his technology from imitators.

“I’ve been coming here since 1984 and always found that the Japanese are very interested in artefacts, in details and how things are designed”, said Dyson.

“The Japanese passion for miniaturising while improving products, the spirit of kaizen, is something with which we feel very in tune—though it’s not always a particularly British philosophy”, he added with a smile.

With the firm’s unique design and technologies being the major selling points, protecting that intellectual property is vital for Dyson’s continued success.

“We have huge problems with patents, though not in Japan I’m happy to say. We’re the second-highest filer of patents in the UK after Rolls-Royce”, explained Dyson.

“The biggest problem is China, where they won’t pass foreign patents but give $15,000 to anyone local who files one. They export so much, they don’t need to do it. It’s simply an unfair trading environment and breaches WTO regulations”, he continued.

According to Dyson, last year his firm gained market share in Japan, where profits then soared about 35%. “We couldn’t supply enough of some products”.