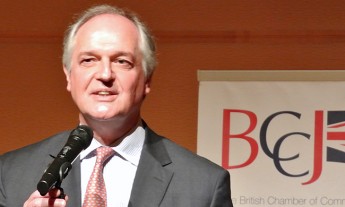 Too many firms have forgotten that they were founded to provide goods and services to help people lead longer, more comfortable and more convenient lives, believes Paul Polman, chief executive of Unilever.

“We need to bring all brands back to purpose”, Polman told an audience at a British Chamber of Commerce in Japan event held at the Tokyo American Club on 17 February. “My vision is that brands should be a movement for good by connecting people”.

Unilever’s predecessor, Lever & Co., was founded in the north-west of England in 1884 by Lord William Hesketh Lever. It was set up to address the problem of unsanitary conditions in Victorian Britain with products such as Sunlight Soap.

It still strives to improve health and well-being by reaching out to millions of consumers around the world on a daily basis.

“Two million children die every year, and that figure can be cut through the simple habit of washing hands”, said Polman.

That is the equivalent of 40 Boeing 747 aircraft full of children crashing every day, he pointed out, and yet the world fails to realise the scale of the problem.

Unilever continues traditions instilled by its founder by encouraging people to use sanitation products, providing access to safe drinking water and constructing toilets in the developing world.

Given that Unilever makes Domestos, a brand with a long tradition of keeping toilets clean, it makes perfect business sense as well, Polman said.

Yet too many firms have become embroiled in “the rat-race of expectations” that revolves around chief executives being required to report impressive quarterly results for their shareholders.

Failure to do so means they are replaced. Equally, the average life span of a publicly listed firm is a little over 18 years.

“We need a different business model”, Polman said. “Not a model that is at the expense of our shareholders, but one that benefits both our shareholders and the world over the long-term”.

And that is not just in terms of helping to address public health issues.

“Unilever has a very simple business”, Polman said. “We are in the business of soup and soap and I want to double our sales, but I also want to decouple our growth and our environmental impact”.

All of Unilever’s manufacturing facilities throughout Europe operate on green energy, the firm has dramatically reduced the amount of water it uses in its manufacturing processes and a number of ingredients, such as palm oil, come from 100% renewable sources.

Climate change formed a key part of Polman’s message and he emphasised that if the world really wants to solve the problems associated with mankind’s impact on our planet, then we need to act now.

“Let me ask you a simple question”, he said. “How many forests can we keep cutting down until all the forests are gone? How many cities can we keep polluting until the people cannot breathe any more?”

On a recent trip to New Delhi, Polman said it was evident that people were tired of existing in a city identified as one of the most polluted in the world. What is more, the situation in the Indian capital is worsening, he added.

In collaboration with other nations, big and small, Japan—if it chooses to—has the ability to play a major role in rectifying that situation.

“If Japan, the world’s third-largest economy, does not play its part, then [the campaign] is not going to work”, he said. “There cannot be opt-in and opt-out if we want to make this world better.

“It takes courage from our governments and our businesspeople”.

Polman also identified the female workforce as an issue that needs to be addressed, pointing out that increased diversity and female participation invariably improves economic prosperity.

In Japan, studies have shown that ensuring equal employment opportunities to women would boost GDP by an impressive 13%, he said.

As well as being good for the environment, public health and business, Unilever’s track record has helped to propel it up the list of firms for which people want to work, with only Apple Inc. and Google Inc. ahead of Unilever on the LinkedIn ranking of employers.

The chief executive of Anglo-Dutch firm Unilever was one of a number of business leaders and academics participating in an event entitled: “Role of Business—Flawless Diversity and Women Empowerment”. Polman addressed a series of questions.

How does Unilever approach diversity?
First, for Unilever—and most other firms are reaching this same point—I want to recruit from 100% of the talent pool; in other words, both men and women.

If you recruit from 50% of the talent pool, you can never compete. In fact, studies globally show that countries in which women do not have the same opportunities as men are economically disadvantaged.

Second, if you look at Unilever’s business, who has the most spending power now? Who is driving the Internet? The answer: most of the purchasers of our brands are women.

Worldwide, even in countries like Iran, 60% of university graduates are women. We also increasingly see that gender-balanced organisations have a better financial performance. The question is, why don’t people apply and practice diversity when its benefits are so obvious?

What practices are in place at Unilever?
In Unilever, 50% of our board members are women, and globally, about 45% of our managers are women. In Japan, this figure stands at slightly over 30%.

While I am not in favour of a quota or forced behaviour system, setting a target and creating an environment where everybody can rise to their full potential is needed. Our programmes show best practice, ranging from monitoring and training to maternity leave and flexible working schedules.

It is hard to fight people’s behaviour. Attitudes are difficult to change sometimes. But, at the end of the day, you have to be sure the firm and its managers believe in diversity and live it.

Unilever discovered a long time ago that we need a gender-balanced lens, extending beyond our own operations, to ensure our business success. With Unilever’s Sustainable Living Plan, we will create an additional five million jobs for women in our value chain.

By incorporating gender diversity in our business, we have increased awareness of the principle among our staff, allowing us to internalise it better. Actually, I think it is one of the main reasons we are able to move it forward.

How can we ensure gender balance happens?
In Japan, the government needs to be more aggressive, not only in its ambition to increase the share of women in leadership positions to at least 30% by 2020 in all fields of society, but also in the tool kits it puts in place to make this possible.

Yet, at the same time, I think the leadership of firms has to show zero tolerance for behaviours that do not promote diversity.

First and foremost, if the chief executive does not have a positive approach to gender diversity, the female staff will not reach their full potential.

Second, if there is not more responsible leadership, the ultimate target will not be reached. I think the biggest challenge I have is people’s behaviours.

In Japan, partly due to the seniority system, senior leaders seem too conservative to handle this issue using both the left and right parts of their brain. Unless some role models and successes—not only in business but also in society as a whole—are created and celebrated, the big change being sought will not be realised.