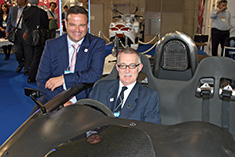 Even though they were surrounded by some of the biggest names in the industry, British auto firms turned a lot of heads at the 2014 Automotive Engineering Exposition, held at the Pacifico Yokohama convention centre.

No fewer than 17 firms and organisations showcased their skills and knowhow in a section of the event dedicated to British excellence in road vehicles.

More than 1.5mn passenger cars and 2.5mn engines were built in the UK in 2013, and the automotive sector is worth a total of £11.2bn to the British economy every year.

The fact that more than half of the cars built in the UK last year were constructed by Japanese firms underlines the close collaboration that exists between the two nations in the auto sector.

However, British businesses are also attempting things that their counterparts here would not even dream of trying.

A full version of this article can be read online at www.exporttojapan.co.uk

More articles in Export To Japan

Working with a local distributor has proved successful for a Bristol-based firm.

A British firm is instilling leadership in Japanese businesses.

Showcasing the Best of British

Top-quality, experienced candidates are increasingly needed for both Japanese and foreign firms.