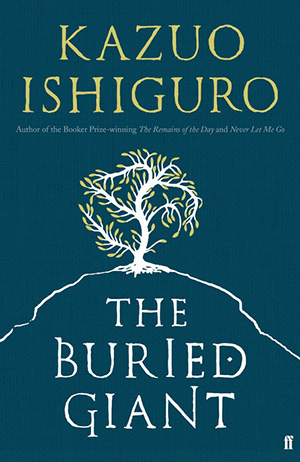 Kazuo Ishiguro’s new novel—his first in a decade—is unlike anything that has gone before. It is dark and uncomfortable, even at times gloomy. Here a nod to J R R Tolkien, there to C S Lewis but, finally, it is Ishiguro’s voice that prevails.

It is a voice that takes a while to get used to. The narrative, especially the dialogue, seems somehow slightly foreign, while the syntax is rather stilted as if in an attempt to lend to the strangeness of the times we are in.

It is a post-Arthurian Britain of perhaps around the 5th century: the period between the exit of the Romans and the arrival of the Anglo-Saxons. It is a time of an uneasy and enforced peace between Saxon and Briton; a peace that will, before long, come to a brutal end in a sort of wave of ethnic cleansing that will lead the English to dominate:

“The giant, once well buried, stirs. When soon he rises, as surely he will, the friendly bonds between us will prove as knots young girls make with the stems of small flowers. Men will burn their neighbours’ houses by night. Hang children from trees at dawn. The rivers will stink of corpses bloated from their days of voyaging”.

But for now, in this fragile peace, an elderly couple, Axl and Beatrice, live a sort of Hobbit-like existence in a dark chamber within a warren dug into the side of a hill. Their small private space is a long way from the great hall and the fire that burns there. They have been deprived of a candle for reasons that are not entirely clear.

Theirs is largely a world of darkness made all the more threatening by the existence outside of ogres, pixies and beasts of other sorts—even dragons. However, there is something closer at hand that compounds their sense of being cut off.

The land is plagued by a curious mist, which causes people to lose their memories of things. The couple have come to a decision to travel some days to visit their son of whom they have only a vague memory, yet they are unsure of why they have been estranged for so long.

Here we are in classic Ishiguro territory: memory and loss are recurring themes throughout his oeuvre. Often the loss is deeply personal, the memories likewise. Here there is a more general loss that affects all and which seems to beg the question: what if the mist were to clear and memories returned?

This is a question for Axl and Beatrice. If they are unable to face their dark memories, how can they know that their love for one another is not false. But the question is of a more general concern.

On their travels to reach their son, the couple encounter a number of individuals, none of whom will turn out to be really what they seem to be. There is the warrior Wistan and the young Master Edwin. Also to be found is Sir Gawain, nephew of King Arthur, a shadow of his former self but still a proud knight of the Round Table—even if his armour has seen better days—set to slay dragons. Or is he?

Ishiguro appears to be constantly advancing the theory that there are buried giants all around.