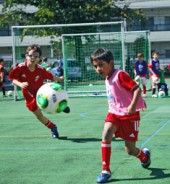 Founder Sid Lloyd came to Japan in 1989, and wanted to fill what he saw as a void in the football scene for foreigners. In addition to an adult expat league, he set up the academy for children of all nationalities to learn, in English, how to play football.

Currently, about 500 children attend on a weekly basis at one of the group’s five locations.