Honoured for services to British business in Japan 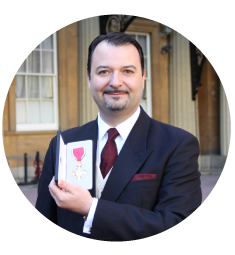 Andy Mankiewicz, BCCJ president for three years until April 2010, has been appointed OBE for his services to British business in Japan. The award had been announced in the Queen’s Birthday Honours List on 11 June 2011, and the investiture was held on 14 December 2011 at Buckingham Palace, where Mankiewicz received The Most Excellent Order of the British Empire from Prince Charles.

“It was one of the most surreal moments of my life”, he said. “Before the ceremony began, all the recipients waited, nervously together in a large ballroom. I spoke to two recipients: a chief fire officer and a senior officer in the armed forces who had just returned from Afghanistan. I was deeply honoured to be in the presence of two people who risk their lives on a daily basis to help others. It was truly a humble feeling”, he added.

Commenting on the BCCJ, he said he believes “most BCCJ members don’t realise that, behind the scenes, there is an Executive Committee, currently with 15 members, as well as representatives of the British Embassy Tokyo and British Council Japan, who generously volunteer their time and skills to serving the members.

“It is their constant dedication, together with that of the Secretariat’s office, that makes the BCCJ what it is today—one of the best foreign chambers of commerce in Japan. I was very lucky and privileged to have a fantastic and diverse team in the Executive Committee that I chaired for three years, and this honour belongs to each one of them”.