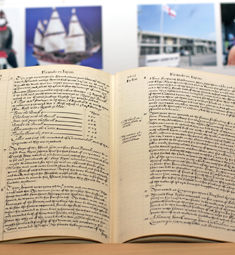 A replica of John Saris’ diary was displayed at the British Embassy Tokyo.

As Britain and Japan mark 400 years of close diplomatic and trade ties—an occasion celebrated in both countries with a series of events throughout the year—it is worth remembering that the relationship originally came about primarily as a result of misunderstanding and misconception on the part of the British.

Professor Timon Screech is head of History of Art at the School of Oriental and African Studies, University of London and co-chair of the Japan400 organising committee. In this capacity, he delivered a lecture on 11 June at the British Embassy Tokyo, where he pointed out that the Clove had arrived off the coast of Hirado, Kyushu, four centuries earlier to the day.

The vessel belonged to the East India Company and had aboard an elegantly designed letter from King James I, as well as gifts for the “emperor of Japan”, by which they meant Tokugawa Ieyasu, who had officially retired but still guided the ruling hand of his son, Hidetada, the titular shogun of Edo.

The first British diplomatic mission to Japan was headed by John Saris of the East India Company. He was quickly contacted by William Adams, an English seaman who, already in the country some 12 years, had arrived aboard a Dutch ship and had become a trusted friend and adviser to Ieyasu.

The new arrivals received lavish gifts from their hosts, including gold screens that since have been lost to history, and two suits of armour, which are kept in the Tower of London.

However, it was a vermilion seal letter (known as a shuinjo) that Saris wanted. Once granted, the letter—which has also survived to this day—gave British nationals official permission to reside in Japan and set up trading stations.

It is at this point, Professor Screech said, that England’s errors become apparent.

“We may ask just what the English thought they were doing in Japan; why go?” Screech said. “Today, it seems obvious—Japan being such a rich and advanced nation—but the East India Company was a spice trading enterprise and Japan [had] no spices”.

The decision to send a ship to Japan was made more than a decade after the firm’s founding in 1600. Then facing stiff competition from the Dutch and Portuguese, the firm was seeking to discover and develop new markets.

According to Screech, a costly expedition to Japan was considered worthwhile for three reasons. “But all three were complete errors”, he said.

The first misconception was Japan’s size. “Japan had never been mapped by Europeans, who relied on Japanese depictions, with European cartographers simply inserting these into their own world maps”, he explained. “Every European map of the period makes Japan about 50 times too big, often several times the size of India.

“This gave the entirely fallacious view that it would be a huge market”.

The second miscalculation concerned the product that England would be exporting. The East India Company had sailed east to purchase spices, but they had to be paid for in either bullion or England’s only world-class indigenous product: wool.

“You can’t sell wool in spice-growing places, where the average temperature is over 30 degrees”, he said. “But since maps proved Japan to be in the north, like Britain, it would surely want woollen [products].

“And if the place was as big as depicted, it would surely consume an endless amount”, he added. “The error here was that, although Japan does have harsh winters, the Japanese had their own perfectly adequate garments already and it was not clear that English ones were superior.

“Moreover, it was hard to transport wool so far without it rotting”, he said.

Strike two for English assumptions. But there was still a plan C.

“On maps of the period, the Russian Far East, Siberia and the Kurile Islands are simply missing”, he said. “This fostered the belief that, while going to Japan via Africa and India was long, a short route existed over the top of Russia”.

An added advantage was that this would avoid areas held by the Portuguese and Spanish, as well as the Dutch-controlled Bantam Strait, on the tip of Java.

Taken together, the concept of a perfect trading route would have seen English wool being shipped over Russia to Japan, where it would be sold for Japanese silver. The silver would then travel down to the “spiceries”, where silver was the preferred form of payment, and exchanged for nutmeg, mace, cloves and pepper. These would then return to London over northern Russia—and with not a Dutchman, Spaniard or Portuguese in sight to interfere.

It was not until well into the 1620s that the English realised their mistakes—and that spices could be purchased in Amsterdam anyway—and dropped the scheme.

Although based on error and short-lived, Professor Screech said that this mutual exposure of the British and Japanese to each other was not forgotten. It made a deep impression that, in time, would grow into one of the modern world’s closest and most enduring trade and political relationships.