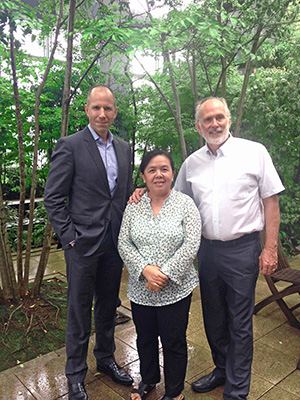 After 13 years living in England, Lowell Sheppard was at ease when he departed Japan for London to set up a UK branch of HOPE International Development Agency in 2001.

Currently Asia-Pacific director of the non-profit organisation that helps people living in some of the world’s poorest areas achieve self-reliance, Sheppard is working to ensure people receive the support they desperately need.

This year is both HOPE’s 40th anniversary and 40 years since the start of the Cambodian genocide, carried out by the Khmer Rouge during 1975–1979. To mark the progress of the charity, Sheppard and his colleague Kim (Ly) Phealy, international director of HOPE’s Cambodia office, share their experiences in the region. Meanwhile, Paul Dupuis, HOPE Japan board member, was encouraged to get involved in the charity by Sheppard.

Omura: Ly, you were 12 years old when you had to leave your home in Cambodia. What was life like?

Phealy: We lost everything. Everyone was forced to leave the city; many people died and children couldn’t attend school. It was a big tragedy to see people suffering and not know what to do to survive. We were in a very sad and hopeless situation.

How were you involved?

Sheppard: I was dispatched to Thailand in 1978 to organise small self-help projects in refugee camps. Looking over the border with Cambodia, I asked myself, “when will I be able to help people there?” At that time, Ly, my future colleague, was 15 years old and in the Cardamom Mountains, undergoing forced migration.

When did HOPE arrive in Cambodia?

Phealy: HOPE came in 1991, when the civil war was on-going and the Khmer Rouge was in the jungle. It wasn’t safe, but HOPE staff went into Pursat Province in the west to assess needs and begin work. Since I joined in 1995, we have installed some 1,300 wells, set up sustainable development programmes, and built more than 40 schools. Generous supporters of HOPE Japan have funded several of these schools; we cannot say thank you enough. I know the hell that we lived in, and to be able to do something to help my country, to see tears transform into smiles, is a great gift.

Why do you provide support?

Dupuis: HOPE works with people on the ground to help them become self-reliant. But, like many people, I wondered if the money really got there. So Lowell said, “Come to Cambodia and see for yourself”. Once I saw HOPE’s projects and their impact, and met Ly and her team, I thought it was incredible.

One man showed us around his home in the jungle. He had benefited from the projects and had taken out a micro loan to purchase a solar panel. Connecting what looked like tweezers together, the light came on and he said, “Now my kids can study at night”.

How does HOPE raise funds?

Sheppard: We do it through people’s generosity. Our work in Japan is largely focused on reaching out to people who are interested in helping others in need. Dupuis: HOPE is not about giving; it’s about facilitating people to become self-reliant. We always welcome new friends to enable us to support more people.

How can people help?

Dupuis: One way is to participate in our 11th HOPE charity dinner in Tokyo on 25 September, which will raise funds for our projects in Cambodia. Please contact us if you are interested in joining or sponsoring it this year. It will be a fun event, where you will have a chance to learn more about HOPE, connect with great people and have fun.