Refugees International Japan (RIJ) began in 1979 with advocacy efforts to improve conditions for Indochinese refugees, particularly Cambodians in camps in Thailand. RIJ’s work has since encompassed a wide spread of activities, from fundraising events to support projects for those forced from their homes as a result of conflict, to creating awareness of the problems of displacement.

Until 1994, Thailand remained the main country to benefit from RIJ funding, and Asia was the major region to benefit. Since then, RIJ’s efforts to aid refugees in regions with new crises and pressing needs have caused the organisation gradually to expand its geographical reach. From 1995, the focus of RIJ funding was not limited to one area but, following refugee movements, covered Africa and Asia.

This marked a change in RIJ’s commitment to provide aid for refugees in need. Funding is no longer limited to, or biased in favour of, a particular country. Instead, careful research, project planning and allocation of funds have made RIJ a truly international organisation.

The refugee problems of the 1990s were characterised by complexity, in that conflicts between ethnic groups proliferated. The flow of refugees created problems where ethnic groups crossed borders and greater stress was placed on host communities. It was then that RIJ funding increased significantly to include Africa and other regions, such as the Balkans.

Refugee populations in excess of 10,000 can now be found in over 70 countries around the world, but the largest numbers are still found in Asia. 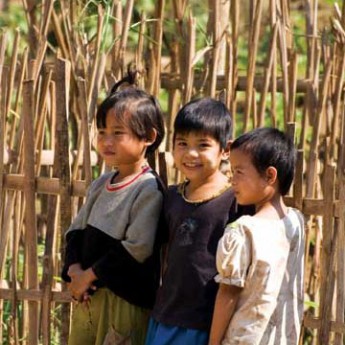 Families of these children in Myanmar benefited from a drug-and-alcohol-rehabilitation project in a refugee camp on the Thai-Myanmar border in 2006.

At the start of the new century it became increasingly apparent that the needs of internally displaced people (IDPs) were growing and needed to be addressed. Host countries were finding the burden of refugee communities increasingly costly and a drain on local resources. As a result, border controls became stricter. It was around this time that RIJ began giving more attention to projects for IDPs.

Over the years, the RIJ has been contributing to an ever-broader range of organisations. Rather than funnel money to a few select enterprises, RIJ has been diligent in funding groups with worthy projects, be they large international NGOs or small local ones.

RIJ has increased its funding from a humble $18,500 in 1981 to $315,000 in the 2008/09 fiscal year. RIJ ensures that at least 85% of funds raised go directly to projects and, thus, to those who need the help. The focus has been comprehensive, from providing new mothers with essential items to promoting single female heads of household and providing proper sanitation and resources, as well as providing empowerment and resources for displaced communities to live better lives.

The aim is to ensure the rights to which every person should be entitled — basic education, proper health services, the right of children to be children, sanitary living conditions, and good nutrition.

RIJ has geared project funding to education, training, empowerment and psycho-social support; projects that aim to develop skills and opportunities for refugees and IDPs so they can provide for themselves and create an environment encouraging self-sufficiency, motivation to improve their lives, and the desire to rebuild peaceful communities upon returning home.

Refugees International Japan is an independent, not-for-profit organisation dedicated to raising funds to assist refugees who have lost everything as a result of war and conflict. Operating from Tokyo, RIJ is staffed by volunteers from the Japanese and international communities. RIJ channels project funds through experienced organisations working in the field with refugees, ensuring that assistance goes quickly and directly to where it is most needed.