The Rio 2016 Olympic and Paralympic Games this past summer was a reminder of just how far our experience with sporting events has come: from 8K high-definition broadcasts by NHK to new, virtual reality-compatible footage by the BBC.

But technology is growing ever more enmeshed with all aspects of sport, from Manchester City hosting “hackathons” for the purpose of finding new ways to analyse performance-related data, to innovative means of delivering content to fans. And new avenues of commercial opportunity are opening up as a result.

In August, UK sports media firm Perform Group, unveiled its DAZN (pronounced “da zone”) streaming platform in Japan, following launches in Europe (the service is currently unavailable in the UK). For ¥1,750 (plus tax) per month, users get access to top competitions for sports, such as football, basketball and baseball, which can be watched at any time on a range of devices. 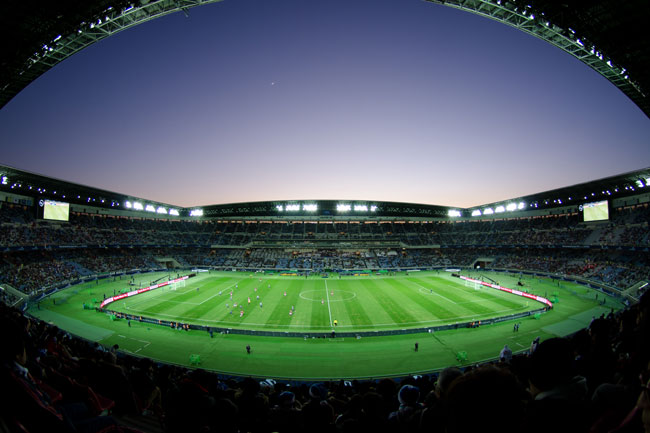 Football stadiums in Japan are poised for a tech upgrade.

The service has already had a big impact on Japan’s sporting landscape. Ahead of DAZN’s launch in the country, Perform Group announced that they had signed a 10-year agreement with J.League to broadcast football matches online in a deal worth ¥210bn, the largest broadcast contract in Japanese sports history, according to the league. Then in October, J.League announced it would scrap its current two-stage system, initially brought in for the 2015 season as a way of increasing revenue opportunities.

The J.League deal is probably just the start. As streaming platforms begin to gain traction, sports revenue may increase, particularly for smaller codes and competitions that, despite having avid fans, have been underserved by broadcasters seeking to reach as large an audience as possible. And even for established leagues, streaming may offer a chance to extract value from fixtures not typically shown on TV, as fans begin to expect to watch any game at any time.

But the technological changes driving innovations in sports business go much deeper than disruptions to how sport is experienced in your living room.

“The main thing is the combination of smartphones and the Internet of Things”, said David Minton, director of The Leisure Database Company and a visiting research fellow at Waseda University’s Research Institute for Sport Business. “Those two things are making everyone need to rethink their existing business model”.

New arenas
In some respects, certain technologies driving sport-related commercial opportunities, such as social media, are nothing new. But increased experience has led to greater sophistication in the way that they offer opportunities with regards to marketing, sponsorship and consumer insights.

For example, Manchester United’s record-breaking signing of Paul Pogba, announced in an Adidas video released in August—through Twitter and featuring British rapper and social media star Stormzy—shows just how effectively such channels can be used in sports marketing.

But perhaps some of the most significant and immediate changes to come through data and smart devices are going to be in how they reshape the live match day experience, with so-called “smart stadiums” replete with Wi-Fi and venue or team-specific apps soon to become the norm. 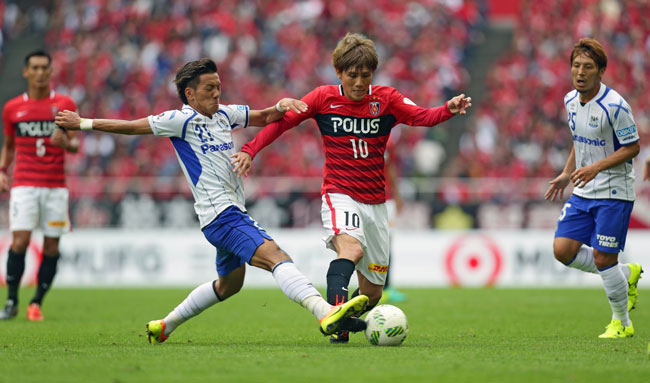 These changes offer the chance to enhance the fan experience by providing unique content, greater convenience and increased interactivity. This can take the form of mobile ticketing, instant game highlights delivered to a smartphone, voting for a “man of the match”, as well as the ability to order food, drink and merchandise through an app. And further possibilities are being opened up by technologies such as the burgeoning field of augmented reality.

“Sport is often now a multi-screen, multimedia experience, which is both an expectation and a need among fans”, said Simon Chadwick, professor of sports enterprise at the University of Salford’s Salford Business School.

Indeed, at the same time as announcing the acquisition of the J.League broadcast rights, Perform Group revealed that the two organisations, along with NTT Group, would be working together to develop smart stadiums complete with Wi-Fi and streaming services.

Then in August, Bradford City became the first club to sign on to a new English Football League (EFL) initiative that will see the roll out of stadium Wi-Fi and club-specific apps that integrate, among other things, highlights and betting opportunities through the EFL’s official betting partner.

As clubs and stadiums move towards mobile ticketing and their own bespoke apps, a number of new data points will emerge, allowing the fine tuning of marketing and merchandising efforts. Soon adverts, refreshments and content may be tailored according to insights into audience profiles and athlete preferences gleaned from app usage.

All of this is a world away from the traditional fan experience. This may rankle with those who grew up with it, but the changes are targeting the consumers of tomorrow.

“With the millennial generation growing in number and gaining in influence, I think we are going to see some very sharp shifts in fan attitudes, necessitating a more dynamic approach to digital and social among sports organisations”, said Chadwick.

And in any case, moves towards making the most of fans as customers are already well under way.

“Most of the Premier League clubs, for example, have got this down to a fine art”, said Neil Levett, managing director of Alad Ltd., organisers of the Stadia & Arena Asia Pacific conference in Japan.

Moreover, Levett notes that the globalised nature of sports ownership, of which English football is a leading example, means that there is increasingly a cross-fertilisation of ideas, with certain practices developed in one country quickly taking root in other countries.

International events contribute to this progression, too, in part because of the expectations that visitors bring with them. With four major international sporting events on the horizon—the 2019 Rugby World Cup, the Tokyo 2020 Olympic and Paralympic Games, the 2021 Kansai World Masters Games and the 2026 Asian Games—this is having an impact on Japan as well.

“[The Japanese government and firms are] starting to put in place the facilities and the experience that international people want, not just what the Japanese have been used to”, said Levett.

International sporting events, particularly the Olympics, are often used to showcase the host country to the rest of the world. For Japan, that is likely to mean playing up to its international reputation as a home of advanced technology, and the Ministry of Education, Culture, Sports, Science and Technology has set out its ambitions in this regard.

“Japan is going to relaunch the country’s technology status for 2020 especially”, said Minton. “Everyone is going to be working to showcase Japan at its best”.

Silent revolution
Technology is not only augmenting existing opportunities around sports, but is creating entirely new activities in its own right, with as many, if not more, commercial opportunities surrounding them. Known as “eSports”, competitions facilitated by electronic systems, particularly computer games, have been building momentum over the past few years. It is a shift that Chadwick describes as “immense”. 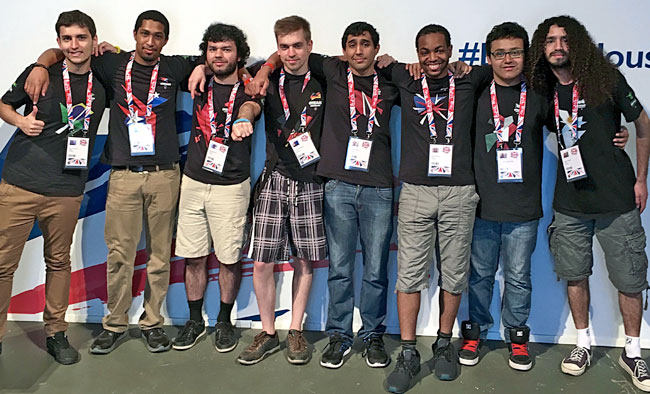 Competitors from eight countries battled it out for medals at the Rio de Janeiro eGames showcase in August 2016.

Newzoo, an Amsterdam-based market intelligence firm, estimates that global eSports revenue will hit $493mn this year, an increase of 51.7% year on year, and the market could be worth $1.1bn in 2019. While that might pale by comparison with the football market, eSports are already tightly linked to many of the technological advances that other competitions are now trying to integrate. Moreover, eSports enjoy strong popularity among the demographic helping to power these changes—millennials.

“It is almost as though a silent revolution is taking place”, said Chadwick. “eSports are massive, but mainstream sport appears largely to be unaware of some of the profound changes taking place”.

Some are catching on, however. In May, West Ham signed its first eSports player, Sean “Dragonn” Allen, who will represent the club at eSports tournaments for the computer game FIFA, while in July, Manchester City followed suit after it snapped up Kieran “Kez” Brown.

Broadcasters have also got in on the act. Sky began broadcasting live drone races on one of its UK channels in October, and the firm is also in discussions with London & Partners to bring drone racing events to the capital.

Although currently Japan lags behind its East Asian neighbours China, South Korea and Taiwan in the eSports stakes, in part because of a focus on console and arcade—as opposed to PC—gaming, the country has nonetheless seen the emergence of its own eSports industry.

Online streaming platforms are the preferred means of consumption for eSports (although live stadium-based events do exist), and Japan’s Niconico service has a significant gaming section. Moreover, several sponsored professional teams have formed, the Japan eSports Association was established last year and athlete visas for eSports players were issued for the first time in March. In June, the UK saw the formation of its own eSports body—the British eSports Association—with government support.

Despite increased official legitimisation, traditionalists may question the extent to which the activities constitute “sport”. Nonetheless, with many sporting events increasingly divorced from geographical and physical boundaries for the majority of fans, due to advances in technology, eSports and its surrounding infrastructure may well be a harbinger of what is to come for the industry at large. 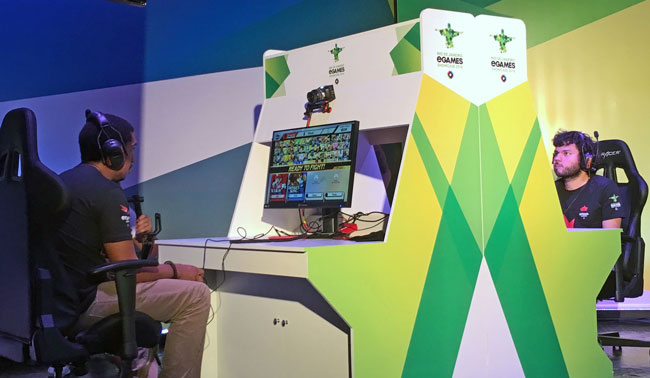 Advocates of eSports hope they might one day be part of the Olympic and Paralympic Games.