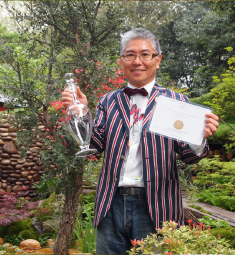 Kazuyuki Ishihara has won seven awards at the show, including four golds.

Kazuyuki Ishihara won the gold medal in the Artisan Garden category at the Royal Horticultural Society’s annual Chelsea Flower Show in late May, bringing home his seventh award from the world’s most famous gardening event. And of that medal total, no fewer than four have now been gold.

Ishihara’s design, titled “Satoyama Life”, was planned as a peaceful space that underlines the importance of coexisting with nature in modern-day life. Satoyama is the Japanese term given to the patches of traditional landscape that dot the space between mountains and lowland, and can be found to this day.

“The countryside of my childhood—40 years ago—was alive with the richness of nature”, he told BCCJ ACUMEN. “Life might not have been so convenient back then, but the people had a certain richness of mind, and seemed to be more at peace with each other.

“I recalled that and wanted to represent those memories and ideas in a garden that took satoyama as its inspiration”, he said.

Sponsored by his own garden design firm— 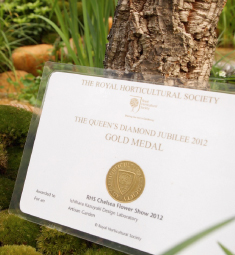 Ishihara Kazuyuki Design Laboratory Co., Ltd.—and five other firms, Ishihara used a thinning out technique to highlight the natural beauty of the garden that contrasts with techniques used in Europe that are more commonly associated with ikebana flower arrangement.

The key plants that were incorporated into the design were acers and other deciduous trees that bud simultaneously, as well as liriope muscari, a species of low, herbaceous flowering plant that is native to East Asia and is known in the West as lilyturf, and quercus suber, an evergreen more commonly known as the cork oak.

The judges and critics agreed with Ishihara’s vision, with the rounded shapes of the mosses—imported specially from Norway for the occasion—covering the building and mirroring the shapes of the stones in the wall.

The Artisan Garden category was returning to the show for a second year, and the designers’ brief was to create a garden that utilised natural, sustainably sourced materials and traditional craftsmanship to complete their projects. 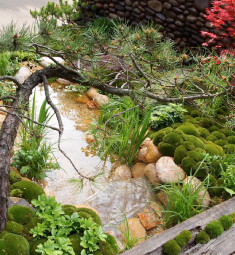 Given the vagaries of the British climate, however, building the garden was not completely without incident for Ishihara.

“In comparison with previous years, it was cold in May in England and that made things more difficult”, he explained. “In particular, matching the conditions in Japan and England, and trying to get the best quality plants to work into the design was challenging”.

While Ishihara was sketching and planning the design in the warmth and relative humidity of a Japanese spring, for example, Britain was experiencing one of its wettest and coolest springs on record—complicated by brief bouts of unseasonably hot weather.

He spent about one month physically assembling the garden in London and spent an estimated £200,000 to complete the project. Ishihara first took part in the Chelsea Flower Show in 2004, when he won the Silver Gilt Medal for his Chic Garden, and says the secret to winning the most coveted titles on the competitive gardening calendar is to have original thoughts that can be expressed in the design, rather than attempting to make a “cool garden”. 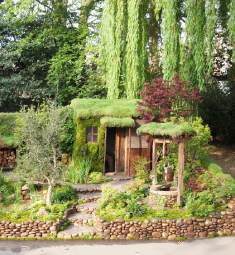 “It is important that the originality of the person who is designing the garden comes through”, he said.

Ishihara said he feels relieved at having won the gold, after only having taken the silver award in the last two years.

“For two years, I could not quite manage to take the gold, but I did it this year, with the support of my sponsors in Japan”, he said. “I can now take the gold medal back to my family and I’m really happy about that”.

And even though it is a long way off yet, Ishihara is already making plans to defend his title next year.

“As long as I have the support and the physical strength, I want to continue challenging the top awards”, he said.