Haruno Yoshida passed away on 30 June. She was 55. Haruno had served on the Executive Committee of the British Chamber of Commerce in Japan (BCCJ) and was the first female leader of two very influen­tial organisations, as president of BT (British Telecom) Japan Corporation and vice chair of the Board of Councillors at the Japan Business Federation (Keidanren).

I usually met Haruno during meetings with the Executive Committee of the British Chamber of Commerce in Japan at the British Embassy Tokyo. When she wasn’t late or leaving early due to other appointments in her hectic schedule, she would sometimes—often in comical fashion—text under the table or whisper urgent phone calls. That was Haruno, doing it her way, juggling her busy life, and good for a laugh.

While researching her career for this piece, I was impressed by her many diverse and demanding roles, including single mother­hood and corporate leadership. Haruno was no token appointment. She was deeply involved in high technology, communi­cations and innovation in Japan and North America when the dotcom sector spectacularly boomed and crashed between 1995 and 2000, and then recovered. And she was based in New York when terrorists attacked the World Trade Center and other targets on 11 September, 2001.

She won many accolades for her work with women, leadership, innovation and diversity, becoming one of Fortune’s World’s 50 Greatest Leaders in 2017. That honour acknowledged her:

And she was always keen to gain more educa­tion and experience, starting her PhD in Womeno­mics just last year at the University of Oxford. 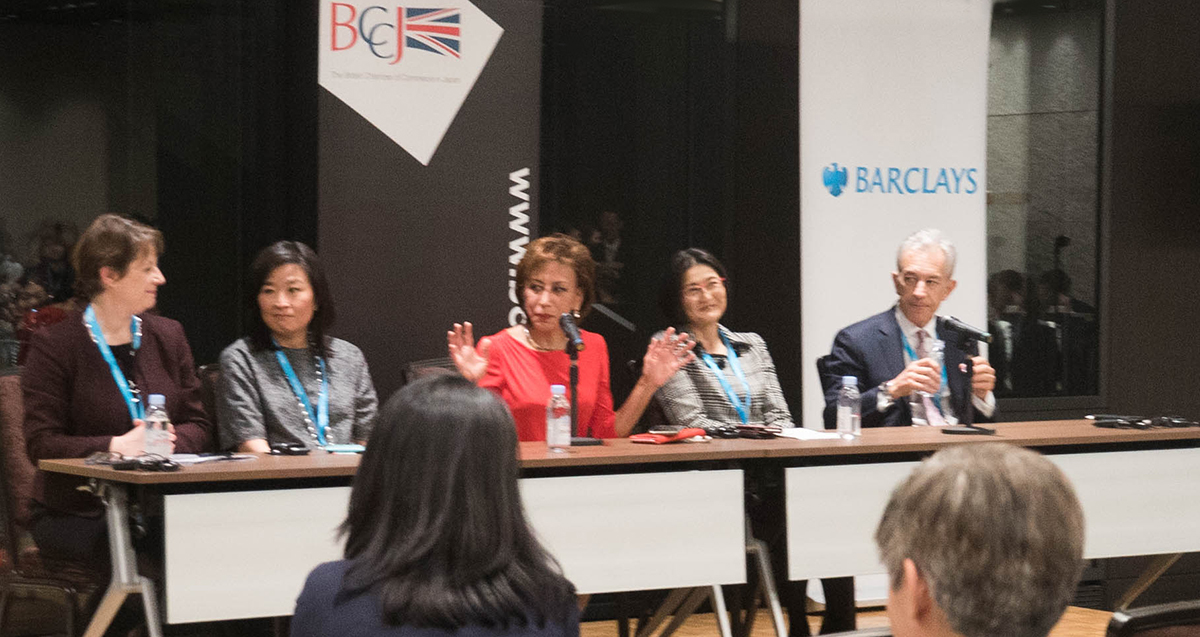 “Haruno Yoshida was a sadly all too rare female face when CEOs of the top British companies in Japan gathered around my table for our regular breakfast meetings. In addition to her deep international business insights, her lively personality always added an extra sparkle. She was an outstanding advocate for women in Japan, and her leadership on the W20/WAW 2019 Conference will be a lasting legacy. RIP Haruno-san”.
Paul Madden CMG, British Ambassador to Japan

“I have so many happy memories of working with Haruno on all sorts of projects, from Philip Hammond’s visit to the BT facilities during his time as Foreign Secretary to the many events where she inspired young women to break through the cultural barriers to pursue their professional goals. I will always remember her for her huge energy, positive mindset and sense of style—but also for her personal warmth and wicked sense of humour. Truly one of the greats. My heartfelt condolences to her family for their loss.
Sue Kinoshita, British Embassy Tokyo

“Yoshida-san was an incredible life force and truly amazing character. She could light up any room and brought tremendous energy to our community over the years. Words cannot express our deep sense of shock and loss at the passing of our friend, mentor and role model. Sending our most sincere condolences to Yoshida-san’s family”.
Lori Henderson, BCCJ executive director

“I think all of us are in shock at hearing this. Yoshida-san was a leader and pioneer who was simply not satisfied to accept the status quo. A trail­blazer, role model and personality of tremen­dous influence. UK business has long been proud to feel blessed by a special connection to Yoshida-san because of her long-held position at the helm of BT in Japan”.
David Bickle, BCCJ president

“It is so very sad—she was so young and was in very good form when she was on the panel at the BCCJ’s international women’s day event, so this comes as a shock to everyone. She leaves quite a legacy, though—what an inspiration she was, especially to women leaders in Japan”.
Tove Kinooka

“What sad news and a big surprise. I saw her in the newspaper just a few days ago. I have only very good memories of having joyful chats with her at BCCJ events and other occasions”.
Susumu Kaminaga

“A terrible shock to hear such a young and vibrant woman has been lost. Yoshida-san had this incre­dible skill to marry absolute authenti­city and a touch of eccentricity with uncompro­mising business smarts and leadership impact. A pioneer who will be missed, but talked about and studied for years to come. A rare mix of being absolutely unique and credible—her absence leaves a gap in the business world that will be hard to fill, but her legacy lives on”.
Sarah Furuya

“I can’t believe that we have lost such an amazing person from our society. She had great passion and the power to influence Japanese business­people into being reborn as global citizens”.
Noriko Silvester

“I am so glad to have seen her in person earlier in the year and to have admired her from the BCCJ table that morning. I think it would be wonderful to pay tribute to her”.
Catherine O Connell

“I’ll never forget her very fierce yet charming personality and humour. There won’t be another one like her, and we are so lucky meeting the one and very special Haruno in this lifetime”.
Miko Liggayu