With a myriad of collection days and categories, not to mention detailed instructions on flattening, tying or de-labelling individual items, what newcomer to Japan has not been overwhelmed when first facing the task of having to recycle their rubbish.

Yet the system delivers. According to the Japan Steel Can Recycling Association, in fiscal 2013, the country’s rate of cardboard recycling was 99.4%, closely followed by steel cans (92.95%) and PET bottles (85.0%). Meanwhile, the UK recycled 60.9% of its steel and 31.6% of its plastic over the same period, according to the Department for the Environment, Food & Rural Affairs.

Considering Japan’s enviable recycling rates, it is surprising that residents in many areas are instructed to dispose of textile products as they would burnable rubbish. According to Japan for Sustainability, a non-profit organisation, 90% of such unwanted items are incinerated.

According to Lynn Wilson of Zero Waste Scotland, a Scottish government-funded body, Japan leads in recycling technology but “the challenge is keeping the materials in circulation [in order to be recycled]”. In the UK, she told BCCJ ACUMEN, it is commonplace for the public to donate their unwanted textiles to charity shops on the high street, but Japan doesn’t have such a network.

Jeplan aims to change that. Its Fuku-fuku project appeals for the public to bring their used textiles to the premises of a wide network of brands such as Patagonia, Muji and Lexus. Rather than send them abroad for reuse as such firms as Uniqlo do, Jeplan recycles these donations into bioethanol, coke, hydrocarbon oil and other products. 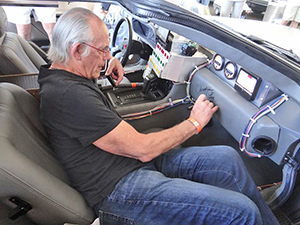 Christopher Lloyd, who played “Doc” in Back to the Future, signed the vehicle.

In December 2015, Jeplan completed a further scheme that sought to fuel a DeLorean car on energy produced by clothing collected from events nationwide. The inspiration was the 30th anniversary of the film, Back to the Future, in which a car runs on organic waste.

“We wanted to make the DeLorean run with biofuel on the exact date shown on the dashboard when the car in the film travelled to the future”, Iwamoto said.

Wilson was among those who came to see the car being driven in Tokyo on that date: 21 October, 2015. With more than 20 years served as a knitted-textile designer and tutor, and experience developing micro-textile businesses in Botswana, her interest was professional.

She also visited firms and organisations across Japan as part of a one-month, fact-finding mission on the country’s recycling technology, funded by a Winston Churchill Travelling Fellowship.

Wilson wants to use her experience in Japan to “really encourage Japanese companies, such as Jeplan, to look at Scotland as a good place to set up a plant or a company”. Central, too, is promoting—across the UK—those Japanese technologies she has uncovered.

“From a textile perspective, Japan has some of the leading technology in the world that will enable circular manufacturing processes”, she said. Her aim is to apply that know-how in Scotland—while also sharing it with the UK—to support a circular economy whereby products and materials are reused continually.

One such technology is Teijin Limited’s Eco Circle®: “It is a perfect example of a closed-loop, whereby clothing made from polyester can be used, returned, reprocessed and made back into a garment”, she said. “These are the kind of models that we are looking for”.

Aside from offering a dramatic reduction in both CO2 output and waste, Eco Circle guarantees no compromise in quality or variation, challenging the commonly held view that recycled products are inferior to new ones.

Wilson believes the technology could work well in public procurement. For example, disposable gowns and gloves used in the UK’s National Health Service could be recycled rather than incinerated or placed in landfill sites.

But there are limitations. While Scotland is home to one of the UK’s biggest textile recyclers, in order for a project such as Eco Circle to work, textiles would need to be gathered from the whole of the UK: “There needs to be a critical mass of material otherwise it is not viable”, she said.

Meanwhile, Wholegarment, a revolutionary system produced by Shima Seiki Mfg., Ltd., focuses on limiting waste in the manufacturing process. Typically, a garment consists of separate parts that are sewn together, but the Wholegarment machine makes it in one piece, three-dimensionally.

“It is zero waste technology but companies in the traditional textile industry in the UK are reluctant to buy into it because they feel that it reduces the degree of employment needed in the process”, Wilson said. She believes, however, that it would be “a great opportunity for small start-ups that are struggling”. 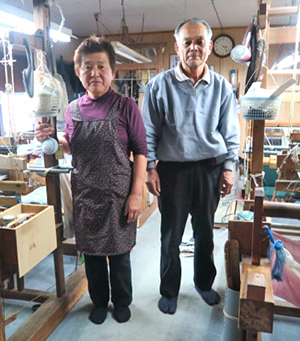 Harris Tweed, kimono silk
During her visit, Wilson drew a number of parallels between the textile industries of Scotland and Japan, not least of which is their strong heritage yet somewhat uncertain future. “Each country is struggling to find the next generation of skilled workers”, she said. “Everyone wants to be a designer; nobody wants to be a technician”.


She met representatives of Okujun K.K., a firm established in 1907 as a kimono maker and wholesaler, and the patrons of which include members of the Imperial Household. Okujun’s Yuki-tsumugi silk fabric production technique, which uses some 40 different small processes, is listed as an Intangible Cultural Heritage by the United Nations Education, Scientific and Cultural Organization. Yet the family business, unable to find an adequate number of skilled staff, has been forced to outsource production overseas.

Similarly, in Scotland, Wilson said that while Harris Tweed is a very successful fabric in terms of sales, it is “very difficult to see how there will be sustainability and succession in terms of who is going to maintain the skills”. She pointed out that silk weavers in Japan are the average age of Harris Tweed weavers in Scotland: 45–65. 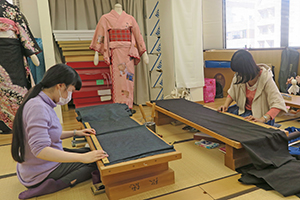 The Scottish textile industry’s issue, explained Wilson, is that manufacturing of brands such as Harris Tweed, Macintosh and a number of cashmere and knitwear firms, can’t keep up with demand. Due to costs and staffing, some firms are sending their iconic made-in-Scotland materials to China to have the bulk of their product made or finished.

To support onshore manufacturing, she is encouraging businesses to adopt such practices as micro-manufacturing, employing up to 10 staff, and small batch runs. New firms could, therefore, be supported to invest in Japan’s Wholegarment technology, she said.

She called for the UK textile industry to identify an environmental impact tool to strengthen the made-in-the-UK narrative of provenance, quality and sustainability. “When Japanese come to Scotland, they want to see the very sheep that the [Harris Tweed] yarn comes from and that becomes the cloth. That is not possible”, she said, adding that there needs to be “understanding and transparency in the supply chain”. 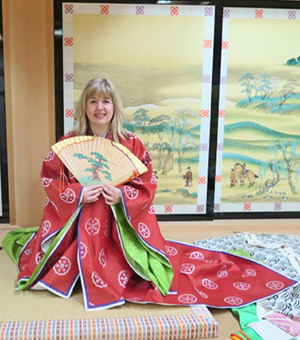 Clothes for life
Wilson is working on setting up skill exchange workshops in Tokyo for British pattern designers and Japanese kimono makers. This will be followed by an exhibition in the UK about the traditional costumes of Scotland and Japan.

With kimono being a zero waste design, and a kilt also having a very minimal amount of lost material, there is much know-how to be shared. “We can learn from our heritage about having sustainability in textiles”, she said.

Culturally, too, both traditional costumes are designed as a product for life that transcends generations, being “lovely examples of the sharing economy”, according to Wilson. Emotional durability is the key, she said, pointing out that if a product lasts, it will be used and loved—and then passed on.

“Circular Economy Wardrobe is my vision for the future of fashion, where we have less stuff in our wardrobes but more experiences with clothing. We can still enjoy the creative expression of fashion without the rest of the world paying the price”, she concluded.