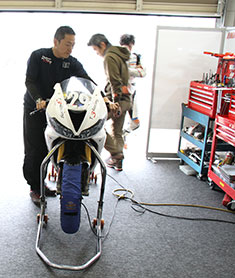 The Daytona is Triumph’s equivalent of a jet fighter.

Picture yourself in the Japanese countryside. You hear the distinct sound of a distant motorcycle. It gets closer. The rider, anonymous in his robot-like helmet, is visible, but only fleetingly: man and machine flitter behind trees and bends in the road.

In full sight, the motorcycle is not, as you expected, made by one of the big four Japanese bike manufacturers—Honda, Yamaha, Suzuki or Kawasaki.

It is a Triumph, made in a factory in Hinckley, England. The words “legend” and “iconic” are over-used these days, but seem to perfectly describe these machines. Triumph: a motorcycle once ridden by stars such as Steve McQueen, Marlon Brando and Bob Dylan.

David Blume, president of Triumph Motorcycles Japan, said the firm was established in the country in 2000. Before that, the bikes were imported on an informal basis. Today, there are 43 Triumph dealers here, but they are not uniformly spread around the country.

“Eighty percent of the big-bike market is concentrated in 18 prefectures, where the people live who have money to spend on their motorcycle hobby”, Blume said.

The Japanese have a keen eye for design, detail and tradition—a combination that this famous 111-year-old British marque has in spades.

According to Blume, three types of Triumphs are popular here: the classics, bikes like the Thruxton and Bonneville; the urban sports models, such as the throaty Speed Triple; and the Adventure machines, like the Tiger series, basically the two-wheeled equivalent of four-wheel drives in the car world.

To import the bikes from such a great distance, and for business to flourish in a sophisticated market like Japan, Blume asserted, you have to ask yourself the right questions: Do you have something that people want to buy in Japan? Do you have a brand or a product that is interesting and can be positioned attractively? Do you have product differentiation that justifies your presence?

“If you can fulfil those points, then you have a chance”, he said.

Blume spoke of Triumph’s heritage, which is a strong selling point in Japan. “The manifestation of [the brand’s] successful history is well executed in our modern classic range. Apart from being a product range that sells well, it is an important link to the historic credentials of the brand, and Japan, in general, has respect for that kind of thing”, he said.

The typical Triumph owner in Japan is a true motorcycle enthusiast, he added, who respects the engineering behind the British machine, its nuts and bolts.

In addition to its bikes’ more traditional vertical twin engines, found in the classics and cruisers, the firm also offers a range with hi-tech, three-cylinder engines. Most other big-bike manufacturers, meanwhile, opt for four cylinders.

Speed Racer
Triumph’s three-cylinder engine powers some of its best-known models, like the Speed Triple, the Adventure series and the Daytona 675cc. The latter is a thoroughbred race machine, Triumph’s equivalent of a jet fighter.

The Daytona is available to buy as a road bike, but it earned its spurs on the racetrack outside Japan. Today, it is the only foreign motorcycle in the Japanese domestic middleweight motorcycle-racing category.

To compete, you cannot simply turn up on a racing bike. You need a team, and backing.

American Jason Fullington has taken on that mission with his D;Rex racing team, which operates three Triumph Daytonas. His racing management career started when he met Hiroshi Toyoda, a professional motorcycle rider, during track days at Tsukuba Circuit, a venue recognised as the testing ground for up-and-coming riders in Japan.

“We wanted to run the Triumph in Japan [in a racing capacity] because nobody else was doing it. It is the only internationally made bike that can compete with the Japanese middle-range supersports”, Fullington said.

Originally, through his industry contacts, Fullington approached Triumph Motorcycles USA for the bikes. Then, the communication moved to Triumph in Britain, which in turn contacted Triumph Motorcycles Japan. “Last year, David Blume helped us facilitate two race bikes. We had to pay for them, but it was supported, they weren’t full price”, he explained.

Fullington said he genuinely loves Triumphs, for their intrinsic qualities, not simply because the firm agreed to help D;Rex.

“The Speed Triple is a superior bike for road riding. When you talk about motorcycling, everything is inherently related to Japanese parts and production, and essentially, this was where big motorcycling was born, through Honda. But when you think of brands outside Japan, one of the first that comes to mind is Triumph, because they have that history”.

Professional motorcycle racing is complex, and expensive. Fullington has to think about transport to and from the venues, tyres, oil, motorway tariffs and so on. To help offset the steep overheads, he is currently looking for new sponsors.

The Daytona chassis is new to the D;Rex team, he said, and it takes time for all personnel to get acquainted with new machines. Triumph, keen to help, flew over its factory team, T3 Racing, from Britain.

“They helped us pinpoint why we weren’t faster than everybody else. It had nothing to do with the performance of the machine and everything to do with suspension. Our sector times [times recorded at intermediate points on a track] were better than [those of] every other bike on the course”.

Now, D;Rex is ready for the 2014 season. Its streamlined Daytonas will be taking on the big four Japanese makers, on their home soil. “One of the reasons I am putting everything into this is because I want to wake the Japanese market up. I love the Japanese makers, but I feel that they have become stagnant in their own front yard”, he said.

Satoshi Aihara, managing director of Tokyo-based PCI Co., Ltd., is the sole Japanese importer of Nortons. He started bringing them into the country in 2009. Aihara also imports Lotuses and Caterham cars.

This calendar year, he will bring 120 Nortons to Japan; 60 machines are already here, and the remainder will enter the market once they are completed at the UK plant.

Machines like Nortons and the Lotuses enjoy a rich history. “Japanese people like the heritage, the branding and the styling”, Aihara said.

Norton makes one model range, the Commando, which is available in three versions: the SF, the Café Racer and the Sport. All are 961cc. Like Triumph, they ooze style—they are modern motorcycles with an aura of British understatement. The engine configuration is two-cylinder, inline.

All motorcycles, from all makers, are designed with specific jobs in mind. There are off-road bikes, long distance tourers, racing bikes and so on. Aihara said the Commandos are able to perform a variety of tasks. They have a “sporty” feel but are suitable for daily runs.

“They’re comfortable, and even though they’re 961cc, they’re not too big. Commandos are good for the city and make good commuting bikes”.

At ¥2.6mn apiece, Nortons are expensive—roughly double the price of a typical bike made by other manufacturers. Aihara pointed out that they are 100% handmade and, despite their vintage appearance, the bikes use modern, advanced components.

As well known as Norton is in the motorcycle world, publicity still plays an important role, especially in a competitive market like Japan. This summer, in conjunction with UK shoe company Clarks, the firm will launch a marketing campaign in Tokyo and Osaka department stores.

Better than driving
The manufacturers produce the machines, but they need people to buy and ride them.

Jules Wigdor is one such fan, and has been motorcycling in Japan for 16 years. His first bike was British, a 125cc BSA (made by the Birmingham Small Arms Company Limited), which he rode off-road in the Scottish Borders as a young boy.

Wigdor now lives in Nishinomiya, part of the Kansai urban sprawl. After a lengthy spell away from the activity, his interest in biking was reignited in Japan. Wigdor uses motorcycles to commute to work and also for recreational rides in the countryside.

“Japan rekindled my passion for bikes. I realised that driving anywhere was so stressful; just a weekend out with the family took hours and hours, stuck in traffic jams. And I thought, what is the point of owning a nice car in this country?

“Then, I discovered that bikes were cheap to buy secondhand, and they were in good condition, with no rust, because the roads here in Kansai are salt-free in winter.

“Compared to riding in the UK, when you get to the countryside here, the roads are not covered in any mud. Tractors don’t shed mud on the roads. You can go around a corner in Japan and know that there will be no potholes. The road will be in beautiful condition”, Wigdor said.

Rural off-road motorcycling gives him enormous pleasure. In his words, a compact, all-terrain bike can spirit you away to the wilds in a way cars cannot. “I can go one hour from Nishinomiya, on my bike, and see views that 99% of Japanese people will never have seen, because they will never have been able to get up the track”, he said.