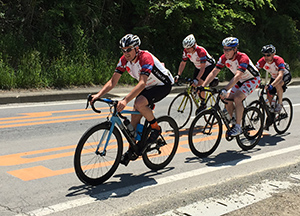 Cyclists take on an uphill stretch.

My business career in Tokyo began in January 2000, in the wild days of the dot-com boom, just before the bubble burst in 2001. There followed the Enron scandal and the Andersen Consulting scandal, which ushered in the Sarbanes-Oxley Act: a set of rules aimed at improving corporate governance and curbing the worst excesses of corporate greed.

In 2008 after the Lehman shock, use of the word corporate always seemed to be followed by the word greed. One became synonymous with the other.

As one who loves building firms and sees it as a creative process, it pained me that the concept of corporate must necessarily be associated with greed. It doesn’t have to be that way. And thankfully it’s not always so.

There is another, much nicer term with which I prefer to associate the term corporate: corporate social responsibility. As a bit of an entrepreneur myself, I very much like the idea of firms taking responsibility for the betterment of society.

I never tire of telling my staff that a business should be like a tree, consuming resources in order to grow, but producing fruit and sustaining an ecosystem of stakeholders, not just stockholders.

While the owner, rightly, will harvest much of the fruit, the windfall will fertilise the soil and provide food for a lot of small neighbours.

On an individual basis it’s hard to know what cause to support or where one’s contribution of time and/or money might be used wisely and honestly. However, we must not allow this to stay our hand.

Thankfully, there are some people out there who agree with me on this point. Indeed, I’m happy to report that in my little part of the world, corporations and people seem to be getting nicer and taking on more social responsibility.

The Great East Japan Earthquake and tsunami were life-changers for many in Japan, me included. The country seems to have become a more pleasant and more caring place in some respects.

Maybe it is simply that I hang out with nicer people these days, or that I’m mellowing into my middle years with a rheumy-eyed, rose-tinted view of the world. But I’m not so sure. That defining moment in March 2011 seems to be bringing out the best in a lot of people.

One such group with which I am proud to be associated is the executive charity cycling team the Knights in White Lycra. In partnership with the registered non-profit organisation O.G.A. for Aid, this group has been raising astounding sums of money for regeneration projects in Tohoku.

To date, they have raised over ¥14.9mn through sponsored cycle rides.

This year I was able to sponsor them through two of the firms I run, Icon Partners K.K. and Compass Offices Japan K.K. Moreover, I bore witness first-hand to their selfless dedication by driving a support van for them on their gruelling ride from Tokyo to Minamisanriku in Miyagi Prefecture—a journey covering 500km over four days in May.

The ride was the third annual event of its type since the group was formed in 2012, having originated with the Brits at Lunch networking group and led by Financial Advisor Rob Williams and Supply Chain Management Director John Stanton.

Having grown steadily in terms of number and support over the past three years, the group fielded a peloton of some 30 riders and support crew this year and raised a record amount of money, currently topping ¥6.75mn.

O.G.A. for Aid Director of Administration Angela Ortiz, herself one of the riders, has been involved in Tohoku-related work since the early aftermath of the triple disasters.

The Ortiz family business, a kindergarten, became the operations centre for a three-month relief effort delivering huge quantities of food, water and emergency supplies to some of the hardest hit areas.

Four years on, their efforts have transitioned from providing relief to sustainability projects. This year’s project, “Place to Grow”, aims to build a learning space in Tohoku where young people can learn agricultural skills and be empowered to contribute to the resurgence of the local farming industry.

Ortiz, an incredible organiser, simply fizzes with energy: just to meet her is to feel empowered. What she and her organisation of volunteers have achieved in Tohoku with the driving—or rather cycling—force of the Knights in White Lycra behind them is simply astounding and humbling.

By giving a little something of my own time and money to this particular cause, I have received a many-fold return of friendship, fulfilment, inspiration and inner peace—which is indeed why I am writing this piece.

If you would like to become part of the growing success story of the Knights in White Lycra and O.G.A. for Aid, please start by visiting them at www.kiwl.net and www.ogaforaid.org. Any contribution of time, money or logistical support will have a real and immediate impact on the people of Tohoku.

I would like to end by using this space to offer my personal thanks and public acclaim to the following corporate sponsors and, of course, to the countless private individuals who have contributed so far: Allied Pickfords, Bell Helicopter Textron Inc., BNP Paribas, Boyd & Moore Executive Search, Compass Offices K.K., Icon Partners K.K., Kreab, Ohana International School, Robert Half and Thermo Fisher Scientific K.K.

Thanks also to Nalsima Frend for jerseys, the MIE Project for energy bars, Eastport Wills Limited for cycling caps, and G.S. Astuto for rider training.