The Hankyu Department Store, in Osaka’s Umeda district, teemed with Japanese customers and British traders on 7–13 October, as the shop’s Hankyu British Fair 2015 showed some of the best products by UK firms trying to enter or expand in the Japanese market. 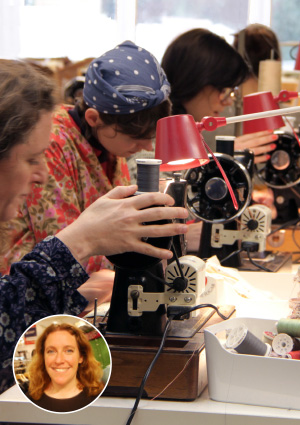 Poppy Treffry (inset) and her team at work in Cornwall.

Poppy Treffry had travelled from Penzance, Cornwall, to attend the fair. Her firm of the same name makes a range of what she described as quirky textiles. On display at the fair were her bags, cushions and mobile phone holders.

The firm uses a process called freehand machine embroidery, which is conducted using 1930 Singer sewing machines to, as she put it, draw the designs onto the textile products. Treffry thinks up the ranges, and then a team of five staff create the products in her studio. She also employs staff who work from home.

“I got told about the Hankyu British Fair by my customers at a trade show in London”, she told BCCJ ACUMEN. “On coming to the fair, it is really educational to see how Japanese customers react to the products, and the way people respond to certain elements of the designs. They have been really liking the design of the man with the beard [on products]; that has been the most popular”.

Sara Eckersley, the firm’s product and wholesale manager, had also travelled to the event. At the stand, the pair were accompanied by Saki Tanaka and her brother Ryohei Tanaka, members of the Japanese family retail business Minatono Tenrankai, which sells Poppy Treffry Ltd. goods in its shops. 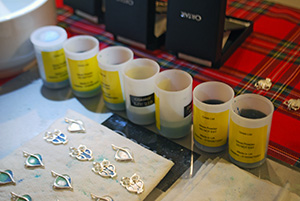 Items from Ortak Ltd.’s jewellery range were created at the fair.

Jewellery maker Michael Gardens, from the Orkney Islands, proudly displayed his wares—a range that includes highly idiosyncratic kilt pins, necklaces, brooches and charms. But Gardens, managing director of jewellery firm Ortak Ltd., was not content just to exhibit his goods. He was crafting some products during the fair, too; he even used a powerful, compact miniature kiln to melt enamel powder.

Gardens employs 20 staff in his Orkney workshop. There are 14,000 Ortak lines, many of which are sold to customers worldwide, via the Internet, he told BCCJ ACUMEN. Much of the jewellery on display was brought to the fair by Takao Inuyama, who imports Gardens’ creations, and then sells them in his shop, British Life, in Arakawa Ward, Tokyo.

A fair such as this is an excellent opportunity to showcase a firm’s goods—his necklaces were the biggest sellers at the event—but exhibitors get the chance to kill two birds with a single stone: they also get to see some of Japan. It was Gardens’ first visit to the country.

“The hospitality of Hankyu has been outstanding”, he said. “It has been absolutely brilliant—and the food [in Japan] is second to none”.

It was also the first visit to Japan for Andrew Michalkow, customer sales manager at The Wentworth Wooden Jigsaw Company Limited, a Wiltshire-based firm that specialises in bespoke jigsaws.

Although looking forward to the trip, Michalkow said the vast distance from the UK to Osaka was slightly unnerving. “I was very excited, and I was also very apprehensive about coming to Japan—it’s not round the corner. It really is another world, as opposed to Europe”.

Yet, he enjoyed the welcome. “I can’t believe how at ease everyone has actually made me feel. I am sitting minding my own business in a restaurant, and within five or ten minutes I am having conversations with people”, he said. 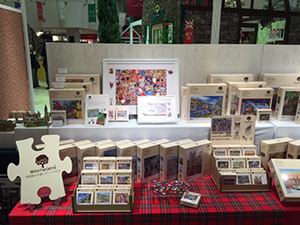 The firm occasionally makes coasters, said Michalkow, but the lion’s share of turnover is generated by the manufacture of high-quality wooden jigsaws. In the UK, the products are either sold through the retail sector, or the business is commissioned. To date, commissions have included those by prestigious organisations—such as The National Gallery, London, and St Paul’s Cathedral—to produce a line of 500 top quality jigsaws.

The firm has four distributors in Japan. An event like this, though, enables customers to see the jigsaws up close, and meet a British representative such as Michalkow, who can explain the hidden gems in the puzzles.

“To make our customers’ life hard, we bisect the corners”, he said. “The normal habit, when you make a jigsaw, is to start with the sides. Then, you do the top. We take everything that you are familiar with, and just throw it out of the window”.

A full-scale replica horse and a vintage Ringtons Ltd. horse van dominated a cavernous hall within the venue. The horse van, Simon Smith told BCCJ ACUMEN, was made in 1915. It took six weeks for the eye-catching item to be shipped for the event from Hartlepool, County Durham, to Japan. 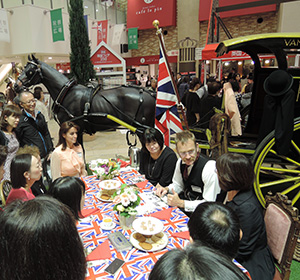 Smith, who is chief executive of the well-known tea firm, said that this was the first Japanese trip for him and his wife Sue. Yet, Ringtons, he said, has had a presence at the fair for three consecutive years, leading up to 2015.

Naoya Okada, head of Ringtons Japan, mainly sells the tea via the Internet. In addition, the tea is sold at events such as the British Fair. Sizeable volumes were bought by Japanese shoppers over the course of the event.

“What we are selling in Japan is British tea made in the British way”, Simon said. “It is the best tea with milk. The two best-selling products are Kenyan Gold and Extra Fresh”.

Ringtons buy top quality teas from all over the world. After being imported into the UK, they are packaged in Newcastle-upon-Tyne.

Like Gardens, Michalkow and Treffry, the fair was also the first time Simon and Sue had come to Japan. “Visiting Japan for the first time has been one of our most exciting travel events”, Simon concluded.

In a move similar to that of tourism bodies VisitBritain and the Japan National Tourism Organization, the 48th annual Hankyu British Fair, which began in 1970, focused on showcasing the best of British goods created in some of the less well-known parts of the UK.

While the Golden Route of Edinburgh, the Lake District, the Cotswolds and London, as well as the items produced in these places, are extremely popular across Japan, Hankyu Department Store representatives spent a month travelling the length and breadth of Britain to bring their customers “countryside treasures from each region”.

With the theme of “Wonderful countryside life”, the ninth floor of the department store was transformed according to four topics: teahouse and pub flavours; beautiful and cute things; plentiful living in the countryside; and full of news: the City of London.

A popular exhibit was one dedicated to the appreciation of tea.

As a representative of the Hankyu Department Store told BCCJ ACUMEN, “Japanese people have a very strong admiration for the UK’s culture of afternoon tea.

“At this fair, attendees experienced a country lifestyle through a closer look at long-established rural tearooms rather than focusing on London”.

About 100 firms showed their wares, which ranged from traditional British icons such as whiskey and fudge, clotted cream and jam, tartan woollens and china, to innovative items such as handcrafted jewellery, textiles and toys.

Representatives hailed from the islands of Shetland and Orkney in the north, to Hastings in the historic county of East Sussex in the south. Places in between included Speyside, the Scottish Borders, Yorkshire, Wiltshire and Staffordshire.

While some companies’ representatives had exhibited at the fair before, others were making their first foray into Japan. They received a warm welcome during the seven-day fair from some 200,000 attendees, an increase from last year’s 170,000 visitors.