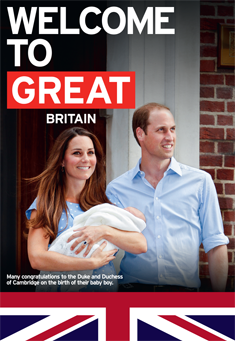 They went there to see for themselves the ornate easel carrying the official announcement and share in the moment of celebration.

The occasion was later marked with gun salutes and the ringing of Westminster Abbey’s bells, while London’s Trafalgar Square was lit blue for a boy and the BT Tower delivered the message “It’s a boy!”.

The Royal Household’s official social media channels have been visited by well-wishers from around the world keen to share in the occasion.

Social media monitoring firms suggest that even before the baby’s birth was announced, 487mn Twitter users had viewed posts about the Duchess going into labour, and Twitter has reported that the #RoyalBaby hashtag peaked at 25,300 tweets per minute.

Here in Japan, the British Embassy Tokyo team has sensed growing levels of anticipation over the past few months and I am delighted to see that so many Japanese are joining in celebrating the birth.

On behalf of the British government in Japan, I would like to thank our many friends here who have contacted the British Embassy Tokyo and the British Consulate-General Osaka to offer heartfelt messages of congratulations to the Duke and Duchess of Cambridge and their first child.

In his statement from Downing Street after the news broke, Prime Minister David Cameron noted that it has been a remarkable few years for our royal family. The royal wedding captured people’s hearts, followed by the Queen’s Diamond Jubilee celebrations, and now the royal birth.

In addition, this summer marks the first anniversary of the London 2012 Olympic and Paralympic Games that put the UK on the world stage, showcasing modern Britain’s creativity, diversity and ability to deliver.

Just as the Games attracted many Japanese visitors, we hope that the royal birth will encourage more Japanese to travel to the UK.

Together with our partners at the British Council and VisitBritain, we want to encourage more Japanese to study at our world-class educational establishments and to visit the UK to experience for themselves the country’s dynamism.

We were delighted that the Duke and Duchess were able to meet Their Majesties the Emperor and Empress of Japan during the Queen’s Diamond Jubilee celebrations last year.

With 2013 marking the 400th anniversary of UK–Japan relations, the birth makes this a year to both reflect on history and look forward to what the next generation will bring. I hope that others in Japan will join me in taking this opportunity to extend our best wishes to the royal family and His Royal Highness Prince George of Cambridge.

Meanwhile, Japanese visitors planning to travel to the UK are encouraged to read VisitBritain’s Japanese-language blog (http://ameblo.jp/britain-park/) that features tips and recommendations for sites with Royal connections to visit in the UK.

These organisations join Custom Media in offering their best wishes to the
Duke and Duchess of Cambridge on the historic birth of their first child,
George Alexander Louis, who is third in line to the throne.