From all royal fans at Custom Media and the British Chamber of Commerce in Japan, a warm welcome to Archie Harrison Mountbatten-Windsor. As you may know, Archie was born on 6 May to Prince Harry and Meghan Markle, who—depending on which historian you trust—may be the first, most recent or only major black member of the Royal Family. Meghan, the Duchess of Sussex, is of mixed heritage, American, divorced, a feminist, a former actress, raised a Protestant and educated a Catholic.

I am sure we will all be watching Meghan’s and Archie’s progress in the future with much interest and support.

Back to my roots

Talking about diverse family lines, one of the most fascinating surprise gifts of recent years for an increasing number of recipients has been home DNA kits that quickly, cheaply and simply reveal your extended heritage and genetic wellness.

Cynics point to the small print about this in­exact science and that, well, we all come from Africa anyway, don’t we? But I just got my results, and I’m gobsmacked: the strong “Atlantic shores of Northern Europe” genetic blueprint of my family and father didn’t raise an eyebrow, other than for nods from East Anglia and Aberdeen.

However, while I did not discover any direct evi­dence of regal descent, I was intrigued that my very conventional English mother’s ancestry had such exotic, long and mixed stock—albeit from many centuries ago: more than one-third Ashkenazi and 17% West Asian, originating from around the end of the Ice Age. Even drops of North Sudan, Druze and Saudi Arabia were extracted from deep in her mitochondrial DNA haplogroup K, which is shaped by immigration, warfare, migration, inter­marriage, conquest and choices. Diverse, and I didn’t even know it.

The DNA kit’s very detailed 60-page report, which includes much theory and science, confi­dently predicted that my child and I will not inherit or pass on any major genetic health problem—so that’s good then. I thoroughly recommend this exercise to anyone with an interest in ancestry and a sense of curiosity and imagination. 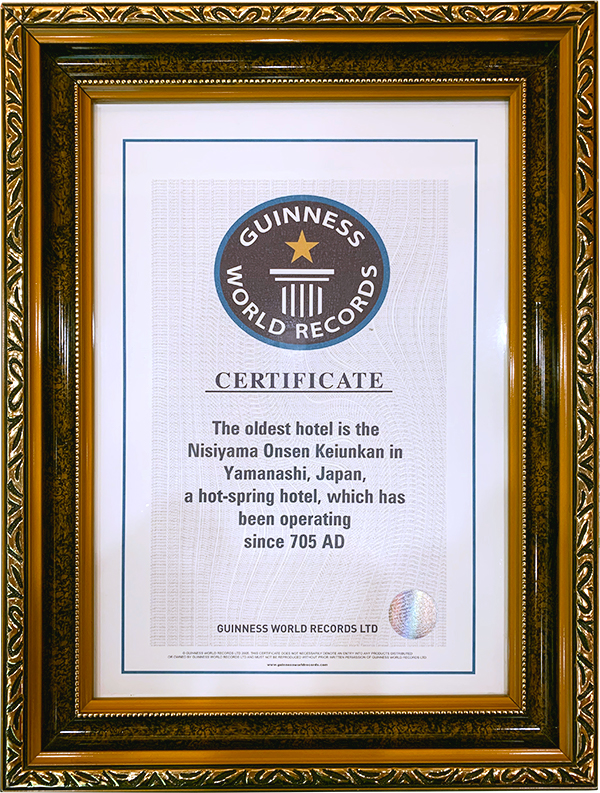 Continuing the historic theme, I spent Golden Week at the world’s oldest inn: incredibly, the Koshu Nishiyama Keiunkan Hotel in Hayakawa-cho, Yamanashi Prefecture, has been run non-stop by 52 consecutive generations of the same family since 705—that’s 1,314 years!

How do I know? It’s a Guinness World Record, naturally. After celebrated engineer and indus­trialist Sir Hugh Beaver KBE founded the Guinness Book of Records at 107 Fleet Street in 1955, along with brothers Norris and Ross McWhirter, nobody thought it would one day itself claim a world record—as the best-selling copyrighted book ever. Sixty-four years later, it has been published in 100 countries and 23 languages.

The best-known Japanese contributions to the book are probably the claim of eating the most hamburgers in three minutes (12) and having the oldest living person (116 years and 130 days). Japan also claims records for the longest and shortest bridges and tunnels and the highest train station. But nobody I know seems to have heard about this time capsule onsen resort at the foot of the Southern Alps.

It is said the hotel and its multiple onsen were twice visited by Tokugawa Ieyasu and even by William Adams, the first Briton in Japan, who Tokugawa made a samurai a mere 400 or so years ago. The hotel may also be the world’s oldest actual business, but even Guinness can’t prove that yet.

So, if you need one more idea for your bucket list, add this historic inn. Ticking it off is just a three-hour drive from Tokyo, just past Mount Fuji. It’s so remote and high up, the welcoming hotel staff—dressed in kimono and armed with local yuzu juice—were patiently waiting outside in the car park having apparently seen us slowly zigzagging up the mountain road from miles away. While the service was far from big-city standard, the enthusiastic staff seemed to have much fun speaking into their digital translators to help foreign guests. And they even stocked the biggest room slippers I have seen in Japan, on which they wrote your name so nobody would accidentally take them while you were in the onsen. That’s Japanese hospitality. Happy Reiwa!