Sixth in our series on four centuries of UK–Japan ties

Events to commemorate 400 years of strong diplomatic, trade and cultural ties between Japan and Britain are continuing in the latter half of the year with exhibits, educational workshops, cultural days and symposiums at venues in both nations.

Further details on all events can be found at:
http://japan400.com/events/
The closing ceremony for Japan400 is scheduled for 20 December. 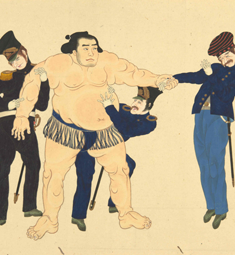 Perry Scroll
Until 13 October
Mitsubishi Corporation Japanese Galleries, the British Museum, London
This remarkable scroll is a vibrant depiction of the visit by US Commodore Matthew Perry to Japan in 1854, a turning point in Japan’s relations with the rest of the world.

Marco Polo and the Silk Road Heritage Sites:
The Birth of Oriental Studies in the Occident
Until 26 December
Toyo Bunko art museum, Honkomagome, Bunkyo Ward, Tokyo
The main attraction in this exhibition is the diary of John Saris, captain of the Clove and commander of London’s first diplomatic mission to Japan. Most of the exhibits are from the museum’s collections and are used to detail the history of oriental studies in the West.

UK–Japan Security Conference 2013
30 September–1 October
Tokyo
The Royal United Services Institute, the world’s oldest defence and security think tank, is staging this discussion in Tokyo on bilateral security concerns. The institute’s delegation, headed by His Royal Highness the Duke of York, will include a number of former members of the British Cabinet. Prime Minister Shinzo Abe will attend the conference, along with senior politicians and defence experts from the UK, Japan and the US.

Torii Kiyonaga, detail taken from Sode no maki (Handscroll for the Sleeve), c.1785

Shunga: Sex and Pleasure in Japanese Art, 1600–1900
3 October–5 January
The British Museum, London
Known as shunga, or spring pictures, thousands of sexually explicit paintings, ukiyo-e woodblock prints and books were produced in Japan from 1600 to 1900. The exhibition features some 170 works from collections in three countries.

Japan Matsuri 2013
5 October
Trafalgar Square, London
An annual event that is open to all, it will be more special this year since it comes on the 400th anniversary of bilateral ties. The matsuri will feature food, music, dance, singing, martial arts displays and family events. It is the largest celebration of Japanese culture in Britain.

British Day at the Toyo Bunko Museum
5 December
The Toyo Bunko Art Museum, Honkomagome, Bunkyo Ward, Tokyo
This commemorative event will be held to mark the day, four centuries ago, on which John Saris’ ship left Japan after the first diplomatic mission to the country. The one-day celebration will include a symposium and performances of British chamber music.