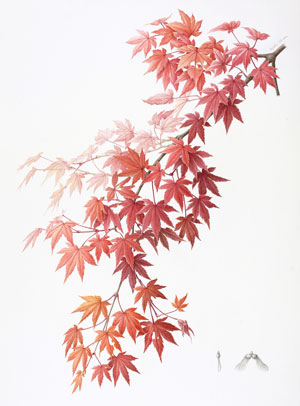 Although perhaps best known in the West for its neon-lit metropolises, Japan has maintained a strong appreciation of the natural world throughout its history. And, from national holidays dedicated to the appreciation of nature, through to hanami cherry blossom viewing parties, this appreciation is something that continues to this day.

It is perhaps not surprising then that Japan has long been a significant contributor to the field of botany, a fact marked by the Flora Japonica art exhibition currently being held at the Royal Botanic Gardens, Kew in London.

Running until 5 March, the show at Kew’s Shirley Sherwood Gallery comprises paintings by 30 contemporary Japanese botanical artists, historical works from Japan and pieces from Kew Gardens’ Illustration and Economic Botany collections. In addition to conveying the diversity and richness of flora native to Japan, the exhibition also highlights the country’s significant influence on Western horticulture.

Based largely on wild specimens found in locations across Japan, ranging from Aomori City in the north of Japan’s main island of Honshu, to Awaji Island in the country’s southwest, the new pieces showcase both the artistry and scientific rigour of contemporary botanical painting. Rich and vibrant depictions of cherry blossom, maple leaves, Japanese camellia and peonies are among those featured in the exhibition. 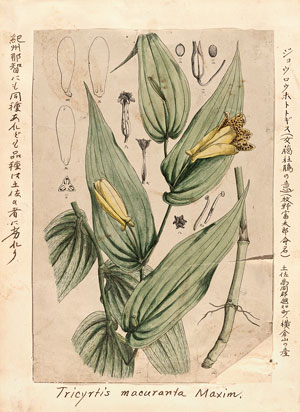 Observed over many months and stages of a plant’s life, the specimens are painted to convey a special sense of nuance and detail. Many track the varied shapes and hues witnessed over a plant’s development. Paintings based on specimens within Kew’s collection round out this collection of contemporary paintings.

Historical works also give a sense of the development of botanical painting in Japan, with Edo and Meiji period pieces on show that have never before been displayed in Europe. Included are illustrations by Tomitaro Makino, the pioneering Japanese botanist, and watercolours by Sessai Hattori and Chikusai Kato. The exhibition also features Kato’s decorative wooden panels made of the wood and bark of the trees that they depict.

The exhibition is accompanied by a 252-page book of the same title, featuring all 80 works commissioned for the exhibition, information on the plants themselves and biographies of the artists. The book also includes an introductory chapter on the history of Japanese botanical illustration, penned by Hideaki Ohba, professor of botany at The University of Tokyo.

Once the exhibition finishes at Kew Gardens, it will move to Japan (date yet to be announced), where it will be shown at the National Museum of Nature and Science in Tokyo and at the Tokyo University Museum.