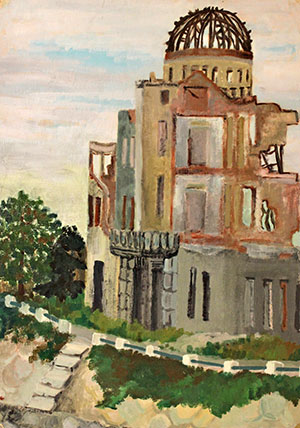 Paintings by young people who survived the atomic bombing of Hiroshima, in 1945, are to be returned to Japan after being displayed for decades in Manchester.

Pupils of the Methodist Girls’ High School in Hiroshima—which was destroyed in the blast of 6 August—created the art in the 1950s after the school was relocated.

When the United Nations Educational, Scientific and Cultural Organization recognised art as a means of fostering international understanding, the Hiroshima Collection was taken to the US by Dr Takuo Matsumoto, the school’s principal and one of only five teachers who survived the bombing.

While at the event, Matsumoto gifted the paintings to Prue Wallis-Myers, a teacher from England who passed them to current custodian and art education expert Michael Stevenson.

In addition to being used as an educational resource at events for teachers and students in the north-west of England, the collection was exhibited at the House of Lords and the Daiwa Anglo–Japanese Foundation in London on the 70th anniversary of the Hiroshima bombing, in 2015.

Now the art is due to make a further impact in Japan. 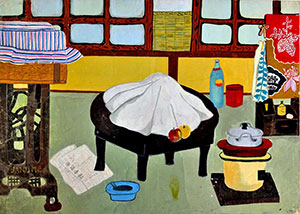 Room in a Japanese House

“I believe that the paintings should be appreciated not simply as beautiful objects, but for the lessons they contain about the wonderful resilience of the human spirit expressed in art by young people”, said Stevenson. “For that reason they deserve to be conserved for future generations to appreciate, and Hiroshima is the right place for that to happen”.

Lord Mayor of Manchester Carl Austin-Behan said the collection was being returned to Hiroshima with Manchester’s message of “thanks, appreciation and friendship”.

“Despite being created by pupils who experienced such horror, the images portrayed are remarkably positive”, he explained. “For decades the Hiroshima collection has inspired hundreds of teachers and students across the north-west of England with their message of harmony and co-operation”.

Manchester is a vice-president city of Mayors for Peace, a programme to promote the solidarity of cities toward abolition of nuclear weapons. More than 7,000 cities in 161 countries and regions are registered members.