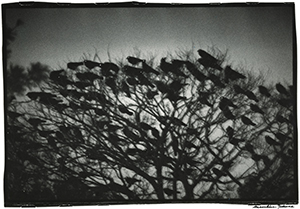 Vintage prints from Masahisa Fukase’s highly acclaimed photobook, Kurasu, (published in English as Solitude of Ravens) have been exhibited for the first time in the UK at the Michael Hoppen Gallery in London.

Featuring ravens and other bleak subjects photographed between 1976 and 1982, following Fukase’s divorce from his second wife, the images explore the themes of isolation and tragedy.

Given that the birds are widely considered a harbinger of dark times, there have been wide interpretations of Kurasu, ranging from a personal reflection of difficult times to a commentary about Japan facing the aftermath of World War II.

Yet, regardless of what people take the photos to mean, the collection brought Fukase widespread recognition in Japan, Europe and the US; it is regarded as the most important—and sought-after—photographic work created in post-war Japan. In 1976, it brought Fukase the 2nd Ina Nobuo Award from Nikon Salon for the best exhibition.

In 2010, Kurasu was awarded the title Best Photobook Published between 1986 and 2009 by the British Journal of Photography. 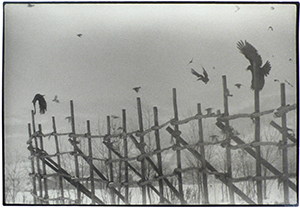 Born in Hokkaido Prefecture in 1934, Fukase graduated from the Nihon University College of Art in 1956 and became a freelance photographer before setting up a photographic school in the mid-1970s. To shoot Kurasu, which began as an eight-part magazine series, he travelled to his home prefecture as well as to Ishikawa Prefecture and Tokyo.

He photographed the ravens in almost total darkness, experimenting with colour film and multiple exposure printing. The success he achieved—given the technical challenges—and the style of the images continue to inspire creative individuals.

Fukase’s many works have been exhibited widely across the US, France and the UK. There has been a revival of interest in him since his death in 2012. In February 2016, Bukubuku (bubbling), regarded as his last great work, was exhibited for the first time since 1992 at the Tate Modern in London.