Ukiyo-e, a traditional genre of Japanese art popular since the 17th century, uses woodblocks to print images on paper. The process involves many elements that are provided by a variety of skilled professionals. However, due to the lack of demand, the number of individuals trained in the art of woodcarving and printing has dwindled. As has the number of families—at an all time low—still making washi, traditional Japanese paper.

This is what motivated Yuka Mitsui to start the Ukiyo-e Project. On 22 June, BCCJ ACUMEN attended the opening night of a weeklong exhibition at Bookmarc, Jingumae. Here, the Ukiyo-e Project displayed its newest subject, British musician David Bowie.

Bowie’s deep admiration for Japanese culture played a large part in the decision to use him as an ukiyo-e subject. Previously having worked with Iron Maiden and Kiss, the Ukiyo-e Project mixes the traditional art with modern culture. The team of people who were involved in this yearlong process was also present at the event, and there was a small DIY printing station for guests to try. 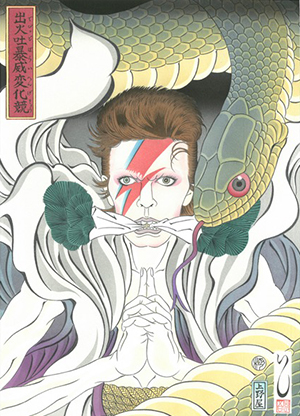 Afterwards, we asked Yuka Mitsui, the founder of the Ukiyo-e Project, a few questions.

When and why did you decide to start the Ukiyo-e Project?
I first started the Ukiyo-e Project about four years ago. I have always had a deep love for Japanese culture, and it has been a personal mission of mine to try and bring this culture to people outside of Japan, and to forge international connections through arts and culture. Most of my career has been working in music, and I studied overseas in Los Angeles, which further increased my motivation in this respect. Several years ago I became interested in ukiyo-e, and I learned that there are only a handful of artists in Japan who continue making ukiyo-e in the traditional way, having learned the techniques passed down by masters over generations. One of the most revered and iconic historical art forms in Japan, the ukiyo-e genre has been an important part of Japanese culture since the 1600s. In recent years, the few remaining artists were considering [giving] up their craft due to lack of demand, and I felt compelled to try to do something to support them. I started the Ukiyo-e Project with the aim of helping these artists, and introducing ukiyo-e to new audiences around the world, to find new appreciation for the art.

Is there a particular process you go through when deciding which public figures to approach for collaboration?
During the Edo Period in the 1600s–1800s, ukiyo-e historically depicted news of the times, often scenes of entertainment, fashion, travel, Kabuki actors, sumo wrestlers, and beautiful women. Our contemporary ukiyo-e stays true to this spirit by depicting iconic musicians.

When considering collaboration, we evaluate the artistic opportunity from an aesthetic perspective, ideally where there is some element of cultural fusion, and in the case of Kiss and Iron Maiden, we were happy to work with musicians who had great respect for Japanese culture and who were passionate about the project.

How important was Bowie’s connection with Japan when choosing him as a subject for the prints?
For quite some time it was a dream of ours to create Bowie ukiyo-e. Bowie is known to have had a strong cultural relationship with Japan. He collaborated with Japanese artists throughout his career, took aesthetic inspiration from Japanese art and theatre, and he loved and respected Japan. With this in mind, we felt it would be a perfect opportunity to bring these artistic worlds together, paying homage to Bowie and creating new artwork. 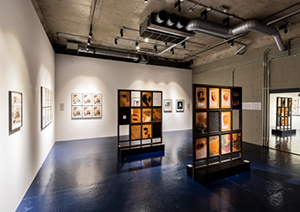 Why did you pick the Bowie photos?
We reviewed several iconic images of Bowie, and discussed the options with Masumi Ishikawa, who is the ukiyo-e illustrator. With his artistic input, we aimed to choose photographs that would be appreciated by Bowie’s fans, and allow for creative interpretation and lend themselves to adaptation in the ukiyo-e style and with incorporation of Japanese historical storylines, as would have been depicted in traditional ukiyo-e.

The Aladdin Sane and Diamond Dogs photographs were perfect for this. We are so thrilled to see this collaboration come to fruition, and it is really an honour having this opportunity to incorporate the work of such revered photographers.

More information about the Ukiyo-e Project and details on how to purchase the artwork can be found at:
https://ukiyoe.today/ 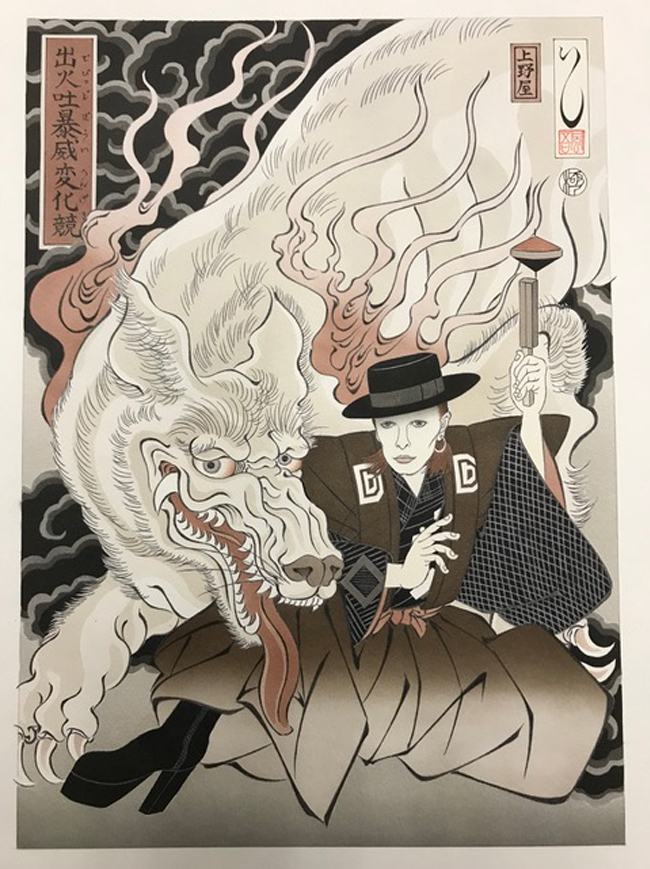