Britain’s long tradition of scientific pioneering is as strong as ever—and is making its presence felt in the Kansai region. BCCJ ACUMEN met with three Britons who, leading the charge, are pursuing their research vocations in Osaka and Kobe. 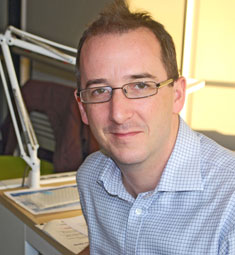 Dr Ben Seymour specialises in neurology, and is a clinical doctor and research scientist.

A layman would be forgiven for not knowing the difference between a neurologist and a neuroscientist. University of Cambridge brain specialist Dr Ben Seymour is both.

“A neuroscientist is a core scientist, a basic research scientist; a neurologist is a clinical doctor who sees patients with brain problems in a hospital”, Seymour explained.

Seymour works nearly 10,000km from his native UK, at the Center for Information and Neural Networks (CiNet) in northern Osaka.

“My career has combined clinical training in neurology, which I have done in Manchester, London and Cambridge. Clinical academia is hard, because there is a long career pathway. At the age of 40, I became an independent neurologist and an independent scientist. To achieve independence in both science and medicine now takes at least 20 years”, he said.

Today, after over two decades of continuous study and research, Seymour has been a visiting principal investigator at CiNet for the past two years.

The institute is jointly run by Osaka University, the Advanced Telecommunications Research Institute International, and the Japanese government’s National Institute for Information and Communications Technology (NICT). Among other achievements, the NICT is credited with developing 3-D television.

“NICT wanted to invest in neuroscience, to meet their broader aims of trying to develop the field of communications technology”, Seymour said.

“Their thinking was, how will the next generation of communications technology exploit the brain? That is, either how brains communicate or, in fact, how the brain works, and how this can be used to build better communications networks, computing and so on”.

Interestingly, Seymour said, “There is no direct industry spin-off. There is a capacity for collaboration with industry and companies, but there is no requirement to do that. It is all applied neuroscience”.

Speaking of scientific processes in general, he explained that some research has “very immediate applications”, while applications for other studies may not be found until many years later.

“My personal belief is that we should stick to doing what is interesting, because that is when we come up with the most creative ideas. You don’t have to have an idea about how an application will develop. There are many unknowns in the world, and we explore them to find what’s there. And then applications come. They always come”, he said assuredly.

The trained neurologist works with three other scientists at the CiNet facility. Currently, he is looking at pain biomarkers (biological markers).

As measures of a certain biological state, biological markers are defined as characteristics that are objectively measured and evaluated as indicators of normal biological and pathogenic processes, or as pharmacological responses to therapeutic intervention.

Seymour and his colleagues use data from brain scans to gauge levels of human pain. “One of the challenges is to develop a biomarker that will aid diagnosis and prognosis”, he said.

Because pain is subjective and cannot be seen, a scan of a human back cannot show the severity of discomfort a person may feel. But, activity in the brain is a representation of that person’s pain.

“If we can understand that, we can understand what causes pain in the first place, in the brain. We can use that to develop new treatments, identify people with chronic pain and classify different types of such pain”, he said. 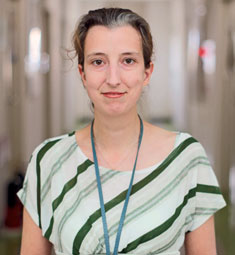 Although the IFReC is run under the auspices of Osaka University, she said that the institution enjoys an element of autonomy.

Hobro is not employed by a British university, so her research is independent of the UK. Her work is funded by the Akira Project, a Japanese science programme that focuses on immunology and is financed by the Japanese government.

“At the moment I am researching Raman spectroscopy, and its applications to all sorts of different things”, Hobro said.

CV Raman (1888–1970) is one of two physicists who discovered the inelastic scattering of light in liquids, she explained.

“This is a measurement technique that can be used for any type of material. You have a laser, at a defined wavelength, and you send it to your molecule. Most of the light doesn’t interact, or it just scatters off at the same frequency. What we are interested in is the light that interacts with the molecule: light that comes back is scattered back at a different frequency to the one we sent to the molecule”, she said.

The difference in frequency, according to Hobro, relates to the vibrations in a molecule. This technique is then applied to cells. Hobro scrutinises any differences in the signature between the cells. The signature is defined as the difference in the signal received, which is obtained in the Raman process. The results tell her which biological molecules inside the sample have changed.

“We are using this method to study cells and tissues that have been infected or activated. In one such project, we are looking for changes in blood cells during malaria infection, such as the presence of hemozoin [a waste product formed by the malaria parasite during the digestion of blood], as a marker for the disease”, she said.

Hobro was keen to share both the complex and modest objects that make up the overall project.

First, a Raman microscope, an enormous tool that is formed by an entire tabletop collection of connected cables, boxes, lenses and objects unidentifiable by a scientific novice. The microscope can be used in three ways: either as a Raman device, as a holographic tool, or, as both simultaneously, she said.

She then pointed to some live cells in an area her colleagues call the Wet Lab. Compared to the Raman microscope, the apparatus used for viewing seemed very basic indeed. A vial of such cells can cost anywhere between ¥20,000 and ¥60,000. Maintained at a temperature of 37°C, the vials are supplied with salt, glucose and amino acids to encourage growth. After increasing in size, the cells reproduce, Hobro said. 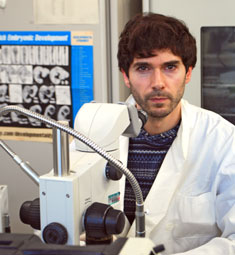 Dr Steve Freeman is interested in why humans lack the ability to repair damage to the inner ear.

Ears to the ground

The third visit was to the RIKEN research centre, on Port Island, Kobe.

Noriko Hiroi, a personal assistant and interpreter at the facility, explained that, in many cases, a bilingual English/Japanese speaker is needed in such a scientific environment. She translates grant proposals and acts as an interpreter at schools when a foreign researcher conducts a presentation. Hiroi also deals with visiting salespeople, who come to the laboratory to exhibit new equipment.

She works in a lab that solely deals with the inner ear. The British scientist, in this case, is visiting researcher Steve Freeman, who started his higher education journey while studying for a biology degree at the University of Leeds.

Reptiles and chickens, he said, have a knack for repairing their ears, but the “million-dollar question” is exactly why humans cannot do the same thing. Our ears have three main parts: the outer, the middle, and the inner ear. Each ear has two functions: hearing, of course, but also balance, he explained.

“Hearing is about hairs. The hearing cells have tiny hairs. Sound hits these hairs and causes them to move, which creates an electronic signal that goes to your brain. When the hairs die, that reduces your hearing; eventually they all die, and you become deaf”.

Bird species, meanwhile, have the extraordinary ability to regrow their ear hairs in as little as two weeks, according to Freeman.

Research processes, he explained, are characterised by troubleshooting. Scientists often rely on inexpensive, small tools like sticky tape and Blu Tack to keep costly equipment ticking over, rather than have such items out of commission while awaiting repair. “People think of labs as pristine, but it is not really like that; it’s a controlled mess”, he said.

Time is the most precious commodity. Typically, a post-doctoral researcher like Freeman spends three to five years on a particular project. His current position ends in August.

Researchers have to write their own medical reports, which are important documents to track their work. A solid, professional tome is a prerequisite for progressing along the research path.

Inevitably, fresh research means entering uncharted areas. And for that reason, Freeman stresses, scientists need to be prepared to deal with the unknown.

“You should never have too much in mind; it is good to be open to all possibilities”.

A British firm at home in Osaka

Anglo-Swedish pharmaceutical firm AstraZeneca plc has 3,000 staff in Japan. Unlike most large global firms with operations in this country, its headquarters are in Osaka, not Tokyo.

AstraZeneca came to Japan and established its base in the Kansai region in 1975. It now operates 20 sites across the country; most of the manufacturing is undertaken in Shiga Prefecture.

“We have two major business units”, said Takako Mitsui, director of corporate communications. “One is oncology, and the other is primary care. For example, we provide respiratory medicine and anti-cholesterol drugs. We are a global company, so the majority of our products [for the Japanese market] are imported from overseas and packaged in Japan”.

Exciting things are in the pipeline for the pharma firm, which the Japanese government has ranked ninth among pharmaceutical companies.

One of its specialities is diabetes medication, and its oral drugs for the condition are expected to enter the Japanese market in the first half of this calendar year.

In addition, it will be moving the AstraZeneca headquarters to the Grand Front Osaka business complex in April.