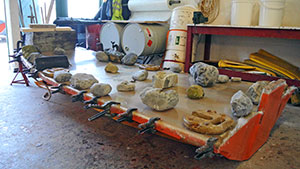 The hull of the Tohoku lifeboat takes shape in Wales.

In the hours after the tsunami spawned by the Great East Japan Earthquake ripped through communities the length of Tohoku’s coastline, survivors could hear cries for help from those who had been unfortunate enough to be washed out to sea. As the night drew in, the calls of those clinging to the debris became weaker and more indistinct until they stopped altogether. Those on the shore lit fires that they hoped would act as beacons for anyone who was struggling in the cold waters, but pitifully few made it back to safety.

Robin Jenkins is convinced that more people could have been saved if Japan had operated a professional coastal rescue service similar to the UK’s Royal National Lifeboat Institution (RNLI).

And four years after perhaps the worst natural disaster in living memory struck Japan, Jenkins is bringing together his former school, a number of leading UK universities, British experts in a wide array of associated fields, and the people and industries of Tohoku in a campaign to set up Japan’s first lifeboat station.

Jenkins—himself a serving member of the RNLI—hopes that, one day, a network of volunteer-run lifeboat stations will dot Japan’s coastline, just as they do in Britain.

An architect by training and a lecturer in interior and spatial design at the University of the Arts London, 41-year-old Jenkins first came to Japan in February 2014 to meet people from Tohoku to discuss sustainable, long-term projects to help hard-hit manufacturers get back on their feet.

“I obviously knew what had happened and I’d seen the footage of the tsunami, so I was somewhat prepared for what I was going to see on that first trip”, Jenkins told BCCJ ACUMEN. “But I was completely and utterly blown away by what I saw. It was still a scene of devastation”.

Jenkins, who is originally from the coastal town of Llantwit Major, near Cardiff, spent one month visiting different factories and small businesses to determine how they had been affected by the disaster, and to hear their ideas for the future.

The focus of the project became Kamaishi City in Iwate Prefecture that was inundated by the tsunami, causing the deaths of 1,250 residents. Being from South Wales, Jenkins said he was quickly “united in a love of drinking, eating and rugby” with the local people, many of whom were still living in temporary accommodation units nearly three years after the disaster.

“Whatever we were going to do, it had to help the local community by being creative and sustainable”, he said.

Staying at a hotel that had miraculously survived the tsunami, and swiftly becoming friends with its indefatigable owner, Akiko Iwasaki, Jenkins heard tales of people being swept out to sea after the initial waves had caused such destruction.

“That really stuck with me”, Jenkins said.

As a member of a lifeboat crew that patrols the River Thames in London and a designer with 25 years of experience on the ocean, an idea swiftly began to take shape, he said.

“My father was a teacher and, later, headmaster of [UWC] Atlantic College in South Wales, which was a unique sort of college set up in the 1960s with the aim of enhancing international understanding”, he said. “The first chancellor, Rear Admiral Desmond Hoare, was ex-Royal Navy and a keen sailor, and promoted outdoor activities throughout the college”. 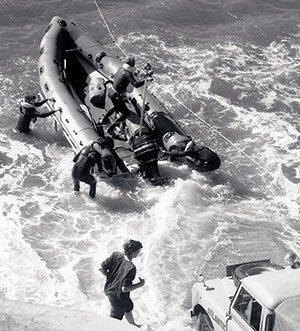 Early experiments with zodiac inflatables as tenders for the college’s sailing boats proved unsuccessful because of the rough and unpredictable Bristol Channel. So, students were set the task of creating a craft that would be effective and stable in those choppy waters. After a series of prototype hulls were designed and tested, the students came up with a rigid fibre-reinforced hull topped by a thick rubber ring that is instantly recognisable as the rigid-hull inflatable boat, or RIB.

The college later sold the patent for the boat for just £1 to the RNLI, which further developed the concept and turned it into the Atlantic Class lifeboat. Nearly 100 Atlantic 21 craft have seen service with the RNLI, along with a similar number of Atlantic 75 boats. Today, a further 88 of the larger Atlantic 85 craft are in operation from the 236 lifeboat stations around the coast of the UK.

Established more than 175 years ago, the RNLI is almost entirely operated by volunteers. The third-biggest charity in the UK, it raises an average of £100mn a year, while its boats rescue, on average, 23 people every day. Operating 24 hours a day, 365 days a year, the Queen is the organisation’s patron, while lifeboats—and their crews—have become the hearts of many communities and a genuine source of local pride.

Jenkins joined the college RNLI crew at the age of 17. Later, when he moved to London to teach, he transferred to the crew of one of the four lifeboats that patrol the River Thames. The 50 volunteers and 10 full-time staff of his lifeboat are called out to around 500 incidents a year, five times more than the next-busiest RNLI station.

Jenkins put his proposal to the city council of Kamaishi, showed them footage of RNLI vessels in operation and spoke with a local boat builder who has, until now, been constructing fishing boats. Shown the plans and the video, the owner of the shipyard said he would be able to follow the plans to build a lifeboat.

The chance discovery of an original hull at a sailing club in South Wales has been used as a template by students at Atlantic College to design a new generation of RIB craft that could operate in Japan. Measuring four metres from bow to stern, the vessel is capable of travelling at 35 knots and has been designed to operate in tsunami conditions.

“Atlantic College is the home of the RIB, but they are having to take into account a whole list of things that will occur in a tsunami”, he said. “I have watched hours of footage of the tsunami to try to understand just what is happening and the forces that will impact the boat”.

The conclusions are that the operators of a lifeboat will be required to put to sea immediately a major earthquake strikes to get beyond the incoming tsunami and avoid becoming a victim of the disaster.

To do that swiftly, the boat needs to be fitted with powerful engines to get through the initial, treacherous waters and carry out rescues from behind the tsunami. Subsequently, however, the vessel will need to be nimble. At present, the college are using two engines—a fast propeller engine and a more manoeuvrable jet propulsion system—suitable for each situation.

“It performs extremely well”, said Jenkins, who has taken a ride in the prototype, adding that the powerful engines “may need some taming” before it is ready to go into operation.

Although completed, Jenkins plans to ship it to Japan next summer when the local infrastructure is expected to be in place.

He is currently designing the town’s lifeboat station, which is to become the heart of the operation. A lifeboat station is a great deal more than simply having a state-of-the-art rescue boat, however, and Jenkins wants the team he has gathered from British construction firms, boat-bulding firms and academia, as well as business strategists and oceanographers, to continue to work with the people of Kamaishi to create infrastructure that will support the rescue boat. That covers everything from training to fund-raising, the creation of an early-warning alarm system, and the administrative side of the operation.

It also includes a coastal path and escape routes—away from beaches and low lying areas—which are being designed in Kamaishi by Jenkins and four students from the University of the Arts London. Construction is due to begin in summer 2016. 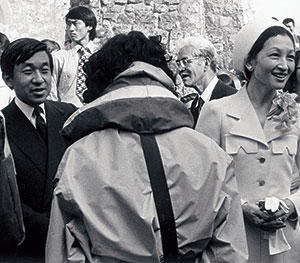 “We want to work with the people of Kamaishi and to show that we can provide assistance and advice over the longer term so the operation is set up correctly, the crew are trained and everything is in place behind the scenes to enable it to work”, he said.

One unofficial target for a fully functioning lifeboat station has been suggested as the Rugby World Cup 2019, as Kamaishi will be hosting a number of matches.

“After I heard the story of people being washed out to sea, I asked what they did, but people shrugged because there was nothing they could do”, Jenkins said. “The Japan Coast Guard is much more like the US Coast Guard and I saw pictures of police paddling around in what were effectively plastic tubs searching for people in the days after the tsunami.

“Japan really needs a lifeboat service equipped with a special type of boat that can work in those conditions and we are hoping that a network of stations around Japan will be the outcome of this initiative”, Jenkins said.