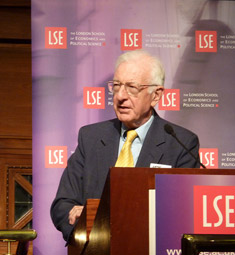 Action for Happiness was launched in London, encouraging hugging, meditation and random kindness, the Mainichi Daily News reported on 12 April.

The nonprofit group says happiness is a deeply serious issue. Co-founder Lord Richard Layard (pictured), emeritus professor of economics at the London School of Economics, says the group “doesn’t have any creed or dogma. It’s a secular movement, grounded in science.

“Our happiness levels have been stuck for the last 60 years”, he said. “Income does not make a lot of difference. The quality of human relationships at home and in the workplace—there are a lot of ways in which those have been neglected in favour of higher income”.

Research suggests that money really can’t buy happiness—and that levels of wellbeing in Britain, the US and other countries have remained static even as disposable income and financial security soared during the great postwar expansion of Western economies.