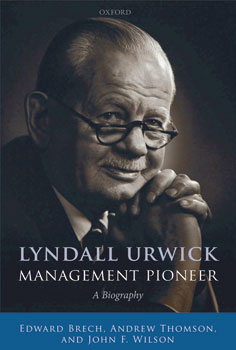 Urwick probably remains the single most important figure in the history and development of management in Britain, and this 225-page biography sets out to show how the man and his ideas were formed, rather than examine his contribution to the field.

His experiences as a young officer in WW I were hugely influential, though this respect for the army didn’t lead to a belief in a military style of management. After the war, and following conflict in his own family business, he entered Rowntree’s in 1921 — where he was to define his management career. With his directorship of the International Management Institute (1928-33), Urwick’s career became truly global and he was the leading figure in his field until the early 1960s. The overall impression is of a man who not only had great vision and professionalism, but also integrity and decency. He gave up the financial portion of his Oxford scholarship to a more needy recipient (who turned out to be political thinker Harold Laski), and had a profound belief in the importance of ethics.