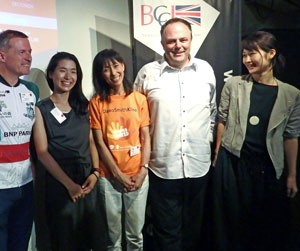 Firms are increasingly keen to show themselves as responsible members of the community. In Japan, that has particularly been the case since the devastating 2011 earthquake in the Tohoku region and, earlier this year, the powerful shocks in Kumamoto Prefecture, which together have made corporate social responsibility (CSR) a more important topic than ever. But for firms just starting on this path, the route ahead isn’t always clear.

Thankfully then, on the evening of 15 September members of the British Chamber of Commerce in Japan (BCCJ) and associated non-profit organisations (NPO) came together at SuperDeluxe in Tokyo’s Roppongi district for the BCCJ’s 2016 Community Hub to talk about their experiences with CSR programmes in Japan.

Speakers included Yukimi Ito, head of communications at GlaxoSmithKline (GSK) Japan, which supports charities such as Save the Children through its unique global partnership called Orange United; Rob Williams of the amateur cycle team Knights in White Lycra (KIWL) that, since 2013, has raised funds for several Japanese charities; Kozue Oka, executive director of the NPO Mirai no Mori, which is currently supported by KIWL; and Mark Dytham MBE of KleinDytham architecture, which backs the NPO Home-for-All.

Using the PechaKucha format—whereby presentations are delivered alongside 20 slides displayed for 20 seconds each—the speakers outlined the scope of their work and their not inconsiderable achievements. This was followed by an opportunity for networking and discussions among attendees, and an insightful Q&A session moderated by BCCJ Executive Director Lori Henderson MBE.

What it takes
For any CSR programme, the main goal is the social benefit it brings, and the organisations of the night’s speakers have made a real impact: KIWL has raised ¥25.2 million in its short history. And there are other benefits, too.

“The GSK and Save the Children partnership is an important example of the way the private and NGO sectors can collaborate for the benefit of people in need around the world and for the sake of businesses, community and wider society”, said Ito.

“When we ask our employees what do you like the most about GSK, many say, ‘Orange spirit’”, said Ito, referring to the ethos of the firm’s various CSR programmes, all of which are identified by “Orange”, GSK’s corporate colour. “We believe this is about bringing employees together and engaging them.

But the benefits are underpinned by significant amounts of hard work, and the speakers outlined some of the challenges associated with running CSR programmes. For those looking to start such initiatives, an obvious question is where to begin. Here, Ito pointed out the importance of finding fellow members of staff, particularly managers, who have a commitment to, and an interest in, CSR.

“Work with them and that is going to be a big driver and will certainly expand the network within the organisation”, she said.

Then there are certain bureaucratic challenges to overcome to attain the appropriate NPO status, which confers certain tax benefits for donations. But it is worth it, according to Mirai no Mori’s Oka.

“If we want to be a sustainable organisation, it’s worth the paperwork”, she said. “But it was really hard”.

Achieving NPO status also comes with other boxes to be ticked, and these can involve serious time commitments.

“We all have to meet once a month by law, and we all do”, said Dytham, noting that Home-for-All counts two Pritzker Prize winners among its board members. However, this requirement does not exist for all NPOs.

Raising money for projects naturally comes with its own difficulties, which are arguably compounded by differences in approaches to charity work between Japan and Western countries.

“This notion of donating for charitable events isn’t something which is in the national psyche here … People are just not used to donating and there’s a trick to try and get that to happen”, said Dytham. “[Donors] need tangible things. They want a return on investment on their donation”.

Indeed, Williams from KIWL noted that a similar mentality also exists among members of the general population. At a KIWL event at the end of October, participants will receive a commemorative T-shirt in return for their entrance fee.

“[The T-shirt] made more Japanese people participate”, he said. “Why? Because they actually get something for what they pay”. This sits more comfortably with Japanese traditions, whereby gift-givers receive a smaller gift in return.

While proper CSR programmes require hard work and dedication, they nonetheless have a value that goes far beyond that of day-to-day business operations.

“Making money is one thing, and you are all very good at that, but I think making meaning is more difficult”, concluded Dytham. “I think the group on the stage can help you make meaning, and that’s a really priceless thing that money can’t buy”.

The Biodiversity Crisis and the Corporate Response