With the official death toll now more than 70 and expected to increase, we offer our sincere condolences to every­one affected by the catastrophic Typhoon Hagibis and its record-breaking rainfall that caused some 150 mudslides in 19 prefectures, flooding nearly 10,000 homes with thick mud and dirty water, bursting dozens of riverbanks and paralysing infra­structure. The media images of collapsed homes, blocked streets and uprooted trees reminded many people of the Great East Japan Earthquake of March 11, 2011.

My street had some of the more than 500,000 properties hit by blackouts, but within three hours the dynamic TEPCO crew got a standing ovation from delighted residents as they sped to the next emergency job.

Some places take days, weeks or months to fix the basics, but Japan just gets on with it—although some areas are still suffering. The military, volun­teers, children, pensioners and even defeated rugby players on their way home got stuck in to help clear the mess, provide aid and console victims.

Among the hundreds of stranded people, I wondered if any visiting rugby fans were seriously caught in the deluge; it must have been terrifying to be travelling abroad in such circumstances.

To be honest, I felt too awkward to ask: how do blind or visually impaired people play rugby? Now I know, thanks to a tip off from the British Embassy Tokyo about a very moving—but neglected by media—event held recently in Saitama that involved England, Japan, the Rugby World Cup and a very good cause indeed. 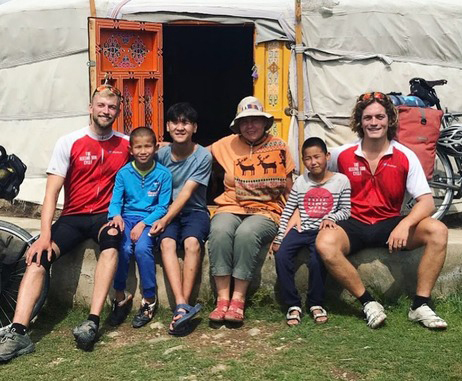 Thanks to a bloke I met in a pub, here are two more generous and brave overlanders to add to those rugby fans featured on this page in the September issue of ACUMEN.

Harry Horner, from Bath in Somerset, set off on two wheels from Ireland in February to support England in Japan. Friend Rob Nichols joined him in Turkey to cycle east through the “Stans”, China and South Korea and raise £22,000—a quid for every kilometre—to replace a filthy, old, dangerous coal burner with clean, safe, cheap solar power at the life-saving Lotus Children’s Centre in Mongolia, which houses about 100 abandoned or orphaned kids.

They didn’t spend a penny on accommodation but, instead, camped, roughed it and stayed on sofas and beds of friends, strangers and sponsors.

Now in Tokyo, they are about £4,500 short, which they hope to raise by the time they reach Hokkaido in December. Sponsors and sofas are very welcome: rob@farsidestudio.com