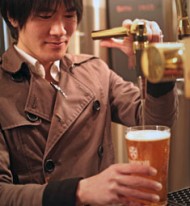 A British-style brewpub has opened in Tokyo’s Asakusa district, The Japan Times reported on 18 February.

Owner James Williams took a three-month course in Britain to hone his skills as a brew master. All the beer served at his pub, Campion Ale, is made in-house.

With seven tall tanks behind the bar, the site has the same setup for fermenting as a traditional brewery, only on a smaller scale. Campion Ale’s signature beers are ready to serve after 10–14 days.

Williams imported much of the pub’s furnishings from the UK. Traditional fare, such as steak pies, is served in addition to a daily selection of brews for about ¥800 each.